Battle for the China Seas

China has literally created its own physical beachheads through the construction of man-made islands at enormous expense.  These newly constructed land aircraft carriers will enable them to plant their flag on an actual island in disputed territories.  This goes to show that SPECTRE, SMERSH and even Dr. Evil were well ahead of their time with the construction of their own “underground” island lairs decades ago.  More importantly and ominously, just as land is a commercially and militarily valuable commodity, this project represents a serious long-term effort with the possible objective of forcing a negotiated peace for territorial recognition. 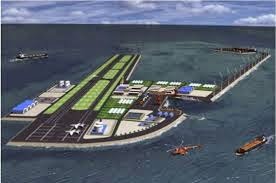 In business a similar tactic is employed when the big boy in the market, usually a large, well-financed corporation with almost unlimited resources “intrudes” into your commercial stronghold or niche by creating a base behind enemy lines for the purposes of capturing market share, poaching talent, stealing customers and in general under-mining your efforts.  With several “bases” they’re everywhere and can strike from anywhere which is always quite disconcerting.  A retreat will result in a smaller pie for your firm and you’ll be reduced to scavenging for crumbs and commercial irrelevance.
An effective and cost effective counter-measure is by securing strong alliances (preferably beforehand in the form of good relationships with customers, suppliers, and banks) and utilizing guerilla tactics to turn the tide and put the large competitor on the defensive.  The good news for you is that your competitor is now already within your territory so he is already surrounded and must either expend more time and money in a face-saving maneuver by defending the position or acquiesce through a face-losing breakout.  Smaller forces are always nimbler and lightning quick with a shorter chain of command and fewer operational restrictions vs. well-financed firm even with smaller independently operating units.


Indo-Brazilian Associates LLC is a NYC-based global advisory service and think tank with connections at the highest levels. We provide you the tools to get on the "Short List" in your business endeavors.

Posted by Atthehighestelevels at 5:17 PM