"Forget It Jake, It's Motor City"

The worldwide and nationwide trend in urban development is increased urban density. Additionally in the US, more and more well-off and wealthy (aka Caucasian) residents have moved from the suburbs into the cities which have become gentrified displacing poor and even middle class residents. 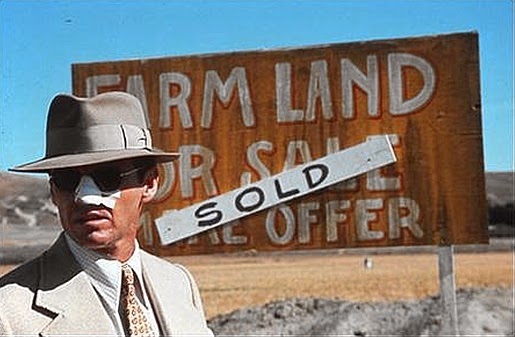 One can strongly draw conclusions that these policies to shut-off utilities are meant more to harm than help. This is a larger scale version of a landlord fiddling with utilities to force a rent-controlled resident out in favor of a resident willing to pay market-rate rent.

Even developing countries with dire financial problems the urban utilities still function at least part of the day in the form of rolling blackouts. For Detroit, a major city in a first world country with plentiful access to water from the Great Lakes, the water supply is turned off based solely on economic considerations.


Whatever cabal is behind choking off Detroit from its water supply, particularly to the poor folks, must make Noah Cross (Chinatown, 1974) quite proud. It’s the powerful irony of plentiful water available from the nearby Great Lakes yet financial considerations are used as an excuse to disrupt water supply while many states in the mid and southwest portion of the country are completely parched from a severe drought. The responsibility is never one person, at least publicly, always a political and corporate collective and hidden behind obscure and confusing regulations whose interpretations are twisted and then legally given the Good Housekeeping seal of approval to protect the guilty.


The blatant thirst for power continues in the urban jungle into the 21st century. It’s eerily similar to what Russia, operationally a dictatorship, is doing in the Ukraine by cutting off natural gas because of alleged unpaid bills. And you thought this stuff happens in only politically unstable regions of the world.


They key question to the Detroit water crisis that disproportionately impacting the poor, as with any urban crisis, is who stands to benefit in the long-term? One could just, “Follow the money.” The old investment edict states that one should invest when there’s blood running in the streets. In this case it’s lack of water and land, abandoned and unoccupied, is cheap.

In an extreme conspiratorial example is the US government. By using an actual scenario, what would be the short-term psychological results if the water supply was disrupted or cut-off? A financial basket case like Detroit is the perfect US city to pull this off . Even if there is no conspiracy and the actions are a result of sheer incompetence, you better believe that there are numerous US agencies collecting data on the developments of this “crisis.”


Whether this crisis was intentionally engineered or not, it’s a fascinating case study for the US government. It provides an excellent case study with respect to the results, reactions and fallout of a major US city whose utilities have been disrupted. How will the population react? By demographics? Riot? Stay calm? Leave Dodge? Go to a black market?


Our infrastructure is out dated and breakdowns resulting in extended outages of water & power may not be uncommon due to natural disasters or simple structural fatigue. Face it. It ‘s happening now!


In business, overwhelming reliance on one source, regardless how historically solid, is a high risk policy. Changes can take place suddenly without warning. A major supplier could be impacted by a natural disaster, government shutdown, strike, scandal, the failure of a key subcontractor to a key subcontractor, regulatory changes, or war. That’s why a even a small firm should, actively seek and maintain a secondary source and contractually lock in a minimum amount of purchases and an addendum stipulating price and your firm as a top priority customer for shipment in case of emergency. This makes a huge difference between received limited supplies at probably a premium price over a complete cut-off from your main supplier. And insure that you utilize this secondary supplier during your current business transactions to create a business and personal relationship so that when it all hits the fan, you’ve already established a track record to continue business.

Indo-Brazilian Associates LLC is a NYC-based global advisory service and think tank with connections at the highest levels. We provide you the tools to get on the "Short List" in your inter-cultural and global business endeavors.
Follow us on Twitter: @caerusNYC
Direct contact: agoldson888@gmail.com

Posted by Atthehighestelevels at 6:08 PM