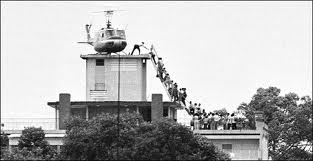 The stunning swiftness of capturing large swaths of territory, oil refineries and major cities in Iraq by ISIS by a small, yet determined and battle-hardened force vs. a large American-trained government army with all the firepower and technological advantages is simply another déjà vu in the annals of military history.  Most recently this happened in Vietnam when American forces trained the South Vietnamese and provided all the weaponry required to defend its territory.  But upon American withdrawal, the South Vietnamese Army collapsed to the Vietcong and North Vietnamese.  In both cases the government army was under command by a corrupt leadership so there was little incentive to die for the Motherland.  And once again we are at the brink of "deja vu all over again" moment with a last minute helicopter evac as we did in Vietnam in 1975.


The same scenario can be applied to the business world in which large companies with competing fiefdoms and dubious business practices are unable to hold market share against hungry, smaller and less capitalized firms.  Often these large companies deliberately foster rivalries and keep them weak to maintain control.  The same has occurred within the Iraqi government fearful that a strong army could eventually overthrow it yet make itself vulnerable to outside forces.


Just because a competitor appears to be big and all powerful, circumstances can reveal specific weaknesses to be exploited.  Smaller firms can take advantage of such situations through the discovery of the larger firm’s highly dissatisfied customers and suppliers who feel have been neglected or not received the service they are paying for.  The key is top-down discipline, focus and speed.


Indo-Brazilian Associates LLC is a NYC-based global advisory service and think tank with connections at the highest levels. We provide you the tools to get on the "Short List" in your business endeavors.