Ebola and the 21st Century Ghetto

USA disaster planning scenarios are usually applied to interruption of services against terrorist acts or natural disasters. Psychologically Americans are somewhat better prepared to deal with terrorist acts and natural disasters – the former based on 9/11 and the latter due to climate change and recent freakish storms throughout the country. 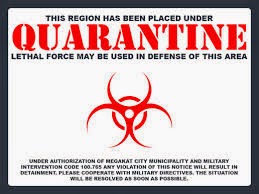 Pandemics are in a different category altogether. Ebola is literally a walking plague that does not cause structural damage or interruption of service. It’s a highly fatal virus, something you can’t see or hear and currently transmissible only by contact with bodily fluids including sweat.


Life in many developing countries amongst the not so fortunate is “short and brutal”. In tropical climates many diseases still exist and thrive in these countries despite the best efforts of Western Big Pharma for many reasons but mainly due to poor sanitation. Ebola is just a deadlier plague.


In the US we live in a well-protected bubble environment - a physical and psychological gated community - where our most pressing everyday health problems involve controlling obesity, high blood pressure, high cholesterol, and chemicals in our foods. A change in diet and even a pill mitigates these problems. Introduce a deadly virus with no proven vaccine into the bubble and panic ensues. During pandemics it’s civil unrest rather than the disease or virus itself that causes the most harm with respect to injuries and death in a community.


And that’s why should Ebola ever reach a large US city, be prepared for the government to impose its own ‘cordon sanitaire’ (a fancy French term for ‘quarantine’) and the imposition of Homeland Security anti-terrorist laws. Their purpose is for containment and crowd control first, eradication of the virus second. These laws were written with the broadest possible intent to encompass any kind of emergency situation. Anti-terrorist laws provide legal government control and population containment with the enthusiastic assistance of the newly militarized law enforcement with heavy guns and heavier vehicles.


Ebola’s arrival to an African immigrant community in NYC will trigger numerous questions and subsequent responses, none of which are good. Such questions include: Quarantine only those who have symptoms? Forcibly quarantine everyone with possible infected people? If a vaccine is available, who receives it first?


Law enforcement had plenty of practice during the Occupy Wall Street protests for kettling – a form of enforced quarantine. Could we be on the brink of constructing our own unique 21st century ghetto? First, any form of containment of a community whose majority is an ethnic minority or religious group will inevitably provoke charges of racism. Second, members of that community will be shunned and even attacked outside the containment zone.


Keep in mind that even the most international and liberal of cities yet can turn xenophobic in a heartbeat if a particular group is identified as carriers of the virus. People always return to their ‘tribes’. Witness the prejudice against people with AIDS or those of the alternate lifestyle. Can you imagine the violence against Ebola virus carriers? Human nature is not much different in a developing country than in a developed one.


Finally how difficult is it to buy a shovel at the hardware store when a major storm is approaching? Always.  And storms come with plenty of warning every winter so it’s annual arrival is never a surprise. Imagine trying to secure medical supplies should there be an Ebola outbreak, or even rumor of an outbreak, in a major US city? Just the infection of a small part of a neighborhood would stretch the supply inventory. Now apply that to an entire city. The shovels may unfortunately end up being used for digging graves.
Copyright Indo-Brazilian Associates LLC 2014. All rights reserved.

Indo-Brazilian Associates LLC is a NYC-based global advisory service and think tank with connections at the highest levels. We provide you the tools to get on the "Short List" in your inter-cultural and global business endeavors.
Cable TV appearances on 2014 Emmy-award winning international talk show "Fresh Outlook":http://www.speakermatch.com/profile/GlobalAdvisors/videos/
Speaker Profilehttp://www.speakermatch.com/profile/GlobalAdvisors/
Published articles:http://ezinearticles.com/?expert=Albert_Goldson
Follow us on Twitter: @caerusNYC


Posted by Atthehighestelevels at 5:36 PM