The request for the arrival of the National Guard may seem alarmist, however it’s actually a counter-intuitive savvy move by the Missouri governor to reduce unrest. And because the US government did not directly request – “federalize” – the National Guard, their deployment to Ferguson, Mo is not legally defined as “troops.” 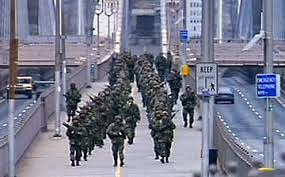 Because the black community has expressed their fury and frustration by the “disrespect” directed at them by the Ferguson police for many years, law enforcement’s continued presence, particularly in military gear and equipment, would only escalate the crisis further. The National Guard is a de facto UN Peacekeeping force (or should we now say “US peacekeeping force”?), a neutral crowd-control force whose presence placates the community to a certain degree and relieves the pressure on local law enforcement.  Additionally, the National Guard’s occupying presence is temporary vs. a permanent presence by local police. This maneuver also buys time, not much, for review and negotiations.


Now just think how astounding it is that Missouri deployed an overwhelming force to quell unrest in a small community of about 21,000 residents. We’ve deployed fewer soldiers to occupy Iraqi cities. Compare Ferguson to larger communities with fury and frustration, notably the NYC nabes of Brownsville and East New York.  Brownsville has a population of about 58,000, 98% of which are people of color.  East New York has a population of 183,000 of which 88% are people of color. Both these nabes almost half the families are below the poverty line compared to Ferguson, Mo which has about20% under the poverty line.  Just imagine how much law enforcement and/or military force would be required to quell a similar disturbance in Brownsville and East New York geographically connected with a combined population of 241,000, or 11 times the population of Ferguson? Or cities with almost the same population such as Orlando or St. Petersburg, Florida or closer to NYC like Jersey City.


Ferguson is a microcosm of what could happen to large communities in cities throughout the US whose residents have been economically and geographically marginalized for years similar to what has already occurred in Paris and London. US law enforcement officers adamantly insist that such disturbances would never spiral out of control because of their closer relationships with the community.  The movie The Siege (1998) – well before 9/11 and eerily presicent – was released at the time a far-flung fantasy plot, is a blue print of what can occur.  Even Major General Devereaux played by Bruce Willis, implored the politicos not to deploy the Army to occupy the cities.


Under the ‘wrong’ circumstances the influence of even moderate community leaders can be neutralized by a new and radical community leadership who can ‘hijack’ a community’s emotions and push it towards the abyss. We’re sitting on a tinderbox whose exploding anger and subsequent roaring flames may be difficult to control.


Prescient scene from the movie The Siege (1998)


Posted by Atthehighestelevels at 3:37 PM