The Missiles of October 2014

As tensions mount on the Russian-Ukrainian border, Twilight Zone similarities are forming with respect to a not so long ago crisis that threatened the world. The Cuban missile crisis in 1962 is a close approximation of how a series of developments, either unchallenged or unchecked can, for lack of a better word, mushroom into something more serious. 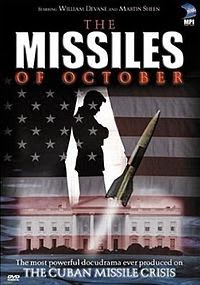 Fidel Castro completed his revolution by ousting corrupt dictator Batista in a coup. Soon after heavy Russian influence, including military weapons and personnel, occupied Cuba. JFK, a Democrat, the youngest US president at 45 years old, and first Catholic, was in office. It was the summer of 1962 that the Cuban Missile crisis began building as a US armada formed a blockade around the island. This followed a failed US-inspired invasion called the Bay of Pigs. A Russian naval convoy carrying weapons tries to run the blockade as US ships fire warning shots.  Days later a US spy plane, a U-2, is shot down over Cuba by a Soviet missile killing the pilot.  For the US, Cuba was the Near Abroad.
Comparing it to 2014, it’s the Ukraine, the people ousted their president, corrupt yet legitimately elected. Without due process for his alleged crimes, his removal from office was a coup. The Ukraine has a substantial Russian influence in eastern part of the country with factories that produce Russian military equipment and armaments. President Obama is another very young US President, elected when he was 47, Democrat and the first of color in the White House. It’s the summer of 2014 and the Ukrainian crisis may be underway as the Russian military dramatically masses forces and firepower near the Ukranian border. This follows a successful invasion and annexation of Crimea. A Russian truck convoy supposedly carrying humanitarian supplies to ethnic Russians is denied access to cross the Ukrainian border.  Not long before a Malaysian airline jet is shot down by a Russian missile killing all aboard.  For Russia, the Ukraine is the Near Abroad.

The big difference between the 1962 Cuban missile crisis and the 2014 Ukrainian affair is that it does not involve nuclear weapons although in both crises missiles are still the major talking point. Additionally the political and military parallels between the US and Russia in both eras are difficult to overlook like a movie remake. Perversely there’s even an historical link déjà vu because Russia actively seeks to restore strong ties with Cuba once again to have a presence on an island 90 miles from the US.

Militarily the Russian only have the capability of capturing and probably holding what they define as Near Abroad territories. NATO has the military power to repulse or dislodge such a force but is politically highly constrained particularly since the Ukraine is not a NATO member. Should Putin decide either to use military force in a limited engagement to protect the rebels and encounters a forceful Western response, Putin can turn off or severely limit energy supplies to most European countries. Essentially this is political blackmail should the West push him further.

Putin will never risk losing territory or face and won’t hesitate to use this energy leverage. Once again Europe is a pawn between the US and Russia just like the Cold War. Neither the US nor Russia depends on the other for their energy needs and can amply fulfill domestic demand. Instead of the click of a trigger, now it’s a click of a mouse that causes havoc.
With respect to Russia, there will never be an admission of a deliberate energy cut-off or reduction. Russia will claim maintenance requirements, phantom breakdowns, parts shortages, equipment problems and even blame the US for cyber-attack limiting energy flow. And then he can apply and demand higher fees to release more gas and oil essentially political surcharges. Although the West can certainly make things financially difficult for the Russians, the Russian can make things equally difficult for the West. The Russian bear never went away. He’s just awoke from hibernation and he’s hungrier than ever.

Posted by Atthehighestelevels at 6:11 PM