A Coalition of One: America’s High Noon in the Middle East 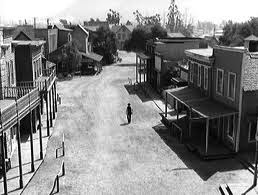 ISIS’ military and public relations objective is to decisively win a major battle against coalition ground forces and force the US to make the excruciating lose-lose choice of either withdrawing from the Middle East or go it alone by committing ground troops. It took the alliance of convenience amongst Kurds, Shiite militia and Iraqi Army with the help of US air power to break the 82-day siege at Iraqi town of Amerli which happens to have the same population of 21,000 as another town under siege during the same period called Ferguson MO. Just imagine what it would take to dislodge ISIS from larger towns and eventually small cities. Air power alone has never won any war so ultimately ground troops are needed. US flyboys can’t be everywhere all the time in an area the size of Indiana. Air power is merely a disruptive not invasive force.


There are unending conflicting interests between the coalition partners making them fractured and weak for a grueling campaign. Each of these coalition countries, de facto police states, already has serious internal threats. And each one of them are aware that a sudden change in American politics midstream can suddenly restrict or even halt US air support leaving coalition ground forces exposed and at the mercy of a battle hardened, well-led and well-disciplined ISIS force. The track record for US-trained forces is abysmal. Even the millions poured into training the South Vietnamese Army in the 1960s and 1970s resulted in a quick collapse shortly after the American withdrawal.


ISIS welcomes this coalition because its composition will neither be robust nor durable. Despite US air support the coalition ground forces ground forces will be underwhelming. That’s why I believe that ISIS will ramp up its operations immediately against proposed coalition countries to “discourage” them from participating. Imagine the US at the head of a line of reluctantly participating coalition members while ISIS begins picking off the members one by one leaving only the US standing.


Another more likely reason why President Obama is reluctant to commit US ground forces is not the threat of ISIS, rather the home front. Americans are war-weary and fed up that the US spent billions of dollars that has resulted in worsening chaos in the Middle East. These billions could have been spent more wisely to spur the economy where the middle class has almost vanished and millions of Americans barely get by paycheck to paycheck – those that have jobs. Any authorization to send US ground forces can provoke significant unrest nationwide requiring more than militarized police to control it.


The depressingly bad news is the dirty secret no one will ever dare broach: the war against ISIS is unwinnable without US ground troops. Politically, authorization for deployment of US ground troops is unlikely to happen under the current administration. The probable domestic political objective of the Obama administration is to contain ISIS through air power and hand off the responsibility to eliminate ISIS with ground forces to the next administration.


Psychologically ISIS has achieved what no other sovereign country in the region has been able to do – dominate and intimate based strictly on a pro-Sunni doctrine which crosses all borders. With its blitzkrieg-like victories, invasion and occupation of vast territories, ISIS combatants probably feel very much like the German soldiers after defeating France and most of Europe in months in 1940 – invincible supermen destined for greatness.
A decisive victory by ISIS over the coalition forces in just one battle will attract thousands of additional recruits worldwide including defectors from al Qaeda that will embolden pro-Sunnis and other militants everywhere. The ISIS leadership is savvy enough to control resources and territory it can effectively defend. Their only potential misstep will be the historical curse of over-reach, the ego-driven grandiose ambitions that exceed operational capability. Sadly it may be the former because these military forces are led by experienced former Iraqi military brass formerly under Saddam Hussein who are clear & free of the insane and self-destructing operational demands of a madman. This is what makes ISIS the Ebola of the Middle East - hard to contain, hard to eliminate.

Posted by Atthehighestelevels at 9:23 PM