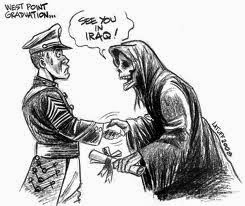 The movie Cross of Iron (1977) is directed by Sam Peckinpah and stars Maximillian Schell (Captain Stransky) and James Coburn (Corporal Steiner) as German soldiers in 1943 on the Eastern Front. The aristocratic Prussian Captain Stransky transfers from occupied France to the Eastern Front for an opportunity to earn the coveted Iron Cross. This medal was first awarded in 1813 during the Napoleonic Wars for distinguished service well before the rise of Nazi Germany. Captain Steiner goes through Machiavelli-type methods to “earn” the medal and frequently buts heads with NCO battle-hardened Corporal Steiner who has contempt for this military social climber.

According to a NY Times article 13 April 2014 entitled “In New Officers’ Careers, Peace Is No Dividend” there’s an eerie similar parallel in the US with some West Point graduates (military aristocrats) in the class of 2014 who are actively seeking combat participation.  The purpose for such a request is that experience in combat duty is a tremendous career booster for future military career opportunities which served the earlier graduates rather well. The same scenario occurred during the Vietnam era when the war was winding down and recently graduated West Point officers requested assignment there to obtain the combat infantry badge.

The article continued stated that these new graduates will be asked to lead men and women who have completed multiple tours in battle-ravaged Middle East without themselves having to face enemy fire. Undoubtedly there’s no substitute for those officers who have “been there, done that” with boots on the ground leading men under fire. Justifiably these soldiers get greater consideration for advancement than those without combat experience. Notwithstanding, despite their deployment stateside to for peaceful assignment, these recent graduates still may get their chance in America’s “forever war” in the Middle East with Special Operations units. But even within Special Forces, advancement may be limited.


I’m sure that not every graduate has a burning desire to enter the cauldron of war. But for those who do, I wonder if they’ve ever visited a VA Hospital or spoken with the families of loved ones killed or maimed serving their country and truthfully explain why they’re anxious to serve in those hotspots.


A career as an officer in the armed forces is a serious commitment, particularly from a prestigious and elite institution. We need men and women like them to defend us in a perpetually turbulent world. War is self-serving a business with bombs and bullets that kill and maim. I just hope for all of our sakes that the vast majority of them are doing it for the right reasons.
Author: A Goldson

Posted by Atthehighestelevels at 6:29 PM