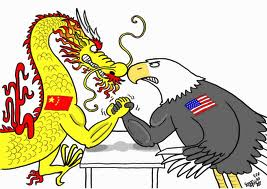 The unfolding events in Ukraine are of intense interest to the Chinese leadership who face similar challenges in their part of the world with respect to perceived Western encroachment and a large Chinese Diaspora near China. Western economic and military offerings of EU and NATO membership to Ukraine are perceived as a serious encroachment into the Russian sphere of influence and buffer zone. This resulted in a not so surprising blowback in the form of the Russian annexation of Crimea and occupation of eastern Ukraine under the convenient guise of protecting its ethnic Russians in those territories. Though this invasion was not conducted by the mighty Soviet military machine of the Cold War, Putin’s willingness to use forceful means to protect his buffer zone is now unquestioned.


Historically there has been a large Chinese diaspora throughout Asia who have suffered pogroms by the indigenous populations in British Malaysia and Indonesia. Ironically during these violent events, China never seriously threatened action to protect or evacuate its ethnic brothers and sisters, perhaps because they were probably seen as traitors to the Motherland, disowned, by living in capitalistic countries. Nowadays China is a capitalistic juggernaut with a need for greater resources to feed a wealthier population. China’s dramatically increased military spending is for the purpose of creating buffers and protective zones like Russia.


The primary differences between China and Russia as to how they handle these encroachments are as follows:

·         First is geography. China’s defense is maritime vs land masses of eastern Europe thus invasion of neighboring countries is all but impossible. However a Chinese naval blockade can be just as effective. Unlike Russia who faces perceived hostile forces mainly to the west, China is almost surrounded by Asian countries: Japan, Korea and the US to the east, India to the west, and Vietnam to the south – a kind of crescent quarantine.


·         Second, Europe has NATO whose charter stipulates an attack on one is an attack on all. There is no NATO-style agreement in Asia, only several recently and hastily formed alliances between Asian countries and the US except for the long-standing US-Japan and US-Taiwan defensive agreements.


Ironically, unlike Russia, because of their huge economy, China is perceived as a greater threat in the 21st century than a militaristic and agrarian society in the 20th century. China is economically globally connected with memberships and participation in a myriad of world organizations and is viewed today as more of a threat when it was economically and politically isolated.


Russia must deal with one organization (NATO) while China must deal with several countries. The advantage goes to China’s ability to weaken their adversaries because there is no collective agreement amongst all the Asian countries, each one having distinct problems, and the US while NATO is one collective unit. Additionally, China’s persistent maritime challenges in the South China Sea including the creation of artificial islands is the Chinese version of establishing a strong presence within the disputed territories of their neighbors who, like Ukraine, do not have a strong military force to dislodge them. To the extent how forcefully the Chinese hold on to their maritime outposts as the Russians hold on to the eastern Ukraine is yet to unfold.

Posted by Atthehighestelevels at 7:25 PM