ISIS at the Crossroads 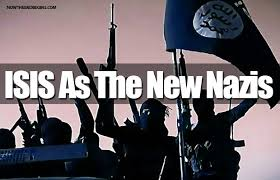 From the perspective of the ISIS leadership they realize that they’ve arrived at a critical crossroad of their existence. Just imagine that you’ve achieved unimaginable success that no other militant group has accomplished in the region in a short period of time.  This wildly successful military and terror campaign have resulted in your soaring popularity amongst your fighters, a booming recruitment of additional militant fighters worldwide and daily revenue of $1-$2 million from oil revenues, kidnapping and other criminal activities.  What lays before you through your binoculars are militarily feeble and corrupt governments who are unable to come together to form a strong ground force coalition for a counter-attack despite the air support of the US, the most powerful country in world history.


On a small scale, these early conquests parallel Nazi Germany who in 1940 conquered most of Europe within months and neutralized Britain. By1941 they made the fateful decision to invade the Soviet Union, the curse of over-stretch, which eventually doomed them 4 years later.


Throughout history all totalitarian regimes think that they’re different and that they’ll change history because of new tactics and new technology to conquer and hold additional lands. Early dramatic victories often result in the delusional thinking that this successful trend will continue.  Often, just as when you win big early in the poker game, you end up borrowing money for a taxi ride home. ISIS is at this crossroad.  Their options are as follows:


Wait: The counter-intuitive, savvy strategy is to halt their expansion, consolidate their power and wait. Any future coalition composed of regional tribes will be weak. By not mobilizing to invade further reduces the urgency to form such a coalition. Then in the near future they can attack each of those parties individually who won’t have the support of their coalition partners with low grade attacks by nibbling at the fringes.


Attack: If you had to pick the jewel in the crown for ISIS it would probably be Baghdad, a capital city of a major oil producing country and OPEC member.  It’s an astoundingly tempting option.  Symbolically it’s the unofficial US military capital in the Middle East and its capitulation will rock capitals worldwide.  If ISIS can sow enough internal chaos and confusion in the city prior to an attack, this could be the major thrust of their next campaign.


But the ISIS doctrine is based on a warped, fanatical religious belief driven by emotion, a collective Messiah Complex, not by logic. Quite importantly, such organizations are not monolithic because there are always various factions jockeying for influence. Often there are differences on matters of execution and other times there are differences on strategic matters. The question is whether the religious and military leadership of ISIS are on the same page strategically.


The former Iraqi military brass is well aware of its operational limitations however the religious leadership doesn’t care. To what extent will this create an internal conflict? This is Western intelligence’s opportunity to inject misinformation and disinformation to create enough internal conflict and dissonance in the ISIS leadership to weaken it, make them turn on each other, and perhaps render it ineffective.


Chances are that the religious faction will prevail because ISIS, like Nazi Germany, is psychologically geared for perpetual war and enslavement of people. The problem for intelligence services is that their governments don’t have strong options as a cause for ISIS fighters to defect. That’s why they joined ISIS in the first place because not even al Qaeda could offer them satisfaction. The only way is to make ISIS an unappealing organization that can’t satisfy their desires.


All power has its limitations politically and militarily.  There is always a line in the sand, not necessarily articulated by Western governments, but when crossed will provoke the US to react and respond accordingly beyond air support.
Copyright Indo-Brazilian Associates LLC 2014. All rights reserved.

Posted by Atthehighestelevels at 7:57 PM