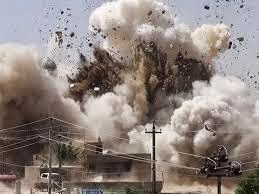 The ISIS killing machine runs on oil, its financial life-blood, that enables it to acquire material and human resources worldwide. Oil is a fungible commodity which is always in demand worldwide regardless of price, particularly the high-quality light sweet crude in Iraq. This means that there’s always a buyer. In the case of ISIS, its buyers are shadowy intermediaries and smugglers who have no political or moral scruples at the ready with all cash payments. There are ways to disrupt these transactions but never shut them down enough to adversely impact ISIS’ operations.


Instead of attacking its army, coalition ground troops (a.k.a. US troops) should focus on its revenue source directly: the dozen or so oil refineries under ISIS control. Defending these facilities is a lose-lose proposition for ISIS. The sudden and severe loss of revenue will soon separate the wheat from the chafe amongst ISIS fighters. In other words, when things get tough or even dire the financial shortfall will cause internal fissures amongst the militants and will reveal which are true believers (fighting for ideology) and which are doing it for cash. More than likely the de facto mercenaries consist of the foreign fighters. It’s not only a method of progressively denying ISIS a major source of funding, it will also create rifts in the ranks making it more difficult for the leadership to control and inspire them to hold fast and push forward. As Napoleon Bonaparte said, “An army travels on its stomach.” For ISIS add petro-dollars.


There are three ways this can be accomplished, each one with its own particular risk:


1.       Blockade/siege: low risk with ground troops who establish themselves on periphery of the oil facility cutting oil pipes and preventing vehicles from entering or leaving. Possible drawing out ISIS forces elsewhere for reinforcements cut down aerial attacks because of open dessert. Isolation of ISIS units.


2.      Invade: High risk with high ground troop losses, damage to the oil facility and possible scuttling of the facility by ISIS forces.


3.      Destroy: Low risk with airstrikes which are currently underway to destroy or disrupt the operations of the oil refineries. Nonetheless ground troops will be required to “mop up” otherwise the militants will undertake repairs.


In WW II the US Marines performed island-hopping amphibious assaults against Imperial Japan in the Pacific. Similarly ground troops would perform oil refinery hopping in the vast desert oceans of the Mideast. This tactic can be undertaken one oil refinery at a time or a simultaneous attack on several.


Once ISIS begins to lose control, a regime at the brink of collapse like a cornered dying beast, is likely to strike out viciously and commit more horrific atrocities if that’s even imaginable.
Author: A Goldson


Indo-Brazilian Associates LLC is a NYC-based global advisory service and think tank with connections at the highest levels. International business is increasingly complex featuring a highly mobile professional class in all corners of the globe. We provide you the tools to successfully negotiate cross-culturally in your global business endeavors. Tell us about your challenges. We'll get you on the "Short List".
Available for speaking engagements and workshops. Check out my international media profile as TV panelist and published articles:

Posted by Atthehighestelevels at 7:41 PM