Political developments in Brazil leading up to the October presidential election are overflowing with Twilight Zone parallels to the events leading to the American presidential elections in 2008.  After a period of explosive economic growth, the Great Recession was enveloping the US economy rapidly that summer.  It featured increased popular discontent particularly with the outrageous upper-level executive salaries and bonuses while millions of workers were being laid off. 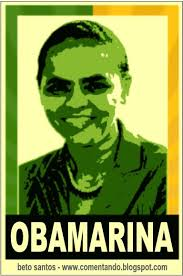 Likewise today Brazil is in the midst of a slowing economy which, according to some economic data may already be recession, after a period of strong economic growth that uplifted the poor into the middle class. Brazil’s economic shock was the revelations of gross cost overruns and alleged wide-spread corruption in expenditures for the World Cup which might have been better served for public services followed by its psychologically devastating defeat at home to Germany 7-1 in the World Cup semi-finals.


President Obama and Marina Silva are mixed race orphans from humble beginnings, born a mere three years apart, liberal leaning, former community organizers and professors who were born far from their nation’s capital and political powers in Honolulu and the Amazon Basin respectively.


Brazilian President Dilma Rousseff is of European descent woman and the protege of former president Luiz Inacio da Silva Lula.  She’s from a political dynasty whose grandfather was Tancredo Neves who was appointed president in 1985 but died before taking office. With respect to gender, Latin America female presidents have always been part of a political family dynasty or had a male relative occupy the highest office. In this case, Ms. Silva does not which makes her accomplishment at being one of the top presidential candidates all the more impressive. Ms. Silva formerly held a high governmental position as Environmental Minister (appointed by another Silva – Luiz Inacio da Silva Lula) and is seeking to become Brazil’s first president of color.  Similarly, President Obama went against the Bush family political dynasty and won.


The personal and political parallels extend to the countries themselves. The United States and Brazil have the largest economies in North and South America respectively and are almost geographically equal in size. Both have recently exploited new energy sources, Brazil with off-shore oil and the US through exploitation of fracking technology. Both are former European colonies and immigrant countries with the largest importation of slaves in the hemisphere. Slavery was dominant in USA south, Brazil in the north. Historically the difference is that the US fought a revolutionary war against England and a civil war while Brazil went through more of a legislative transition for independence from Portugal and the abolition of slavery.


Brazil’s non-white population is larger percentage of the total population than that of the US though historically in Brazil there are fewer opportunities for them in education, business and government. Brazil’s handful of non-discriminatory laws is not aggressively enforced compared to those in the US.


As in Obama’s 2008 campaign, Marina Silva’s is riding the wave of enormous discontent of a population fed-up with the current power structure and laggard economy, and who are seeking a profound change. Brazil has a feudal societal structure with a small, all-white elite, a small middle class and large underclass population. Ironically the US is assuming a quasi-feudal structure too with a small, all-white elite, shrinking middle class, and a growing underclass with a comparative gap between rich and poor to Brazil.


Should Marina Silva become Brazil’s president, it would be interesting if she encounters similar perceived ethnic and racial attacks as President Obama, and if so, in what form will they take.  Even in multiethnic and multiracial societies deep hidden prejudices lurk just under the surface and attack viciously when the status quo is challenged and changed.

Posted by Atthehighestelevels at 7:06 PM