Russian Bear on a Short Leash

Mr. Putin’s strategy to blunt Ukrainian commercial and military integration with the West had an extremely high rate of success with minimal downside from the get go. At the outset, if the rebels conquered and successfully held the ethnic-Russian eastern territory, this newly created buffer would meet Putin’s political requirements to weaken Ukraine. If the separatists were repelled by Ukrainian government forces and forced back, Putin could claim a looming humanitarian crisis and “rescue” the ethnic Russian population through indirect or if necessary, direct military intervention using the pro-Russia separatists as the spear in the counter-attack. 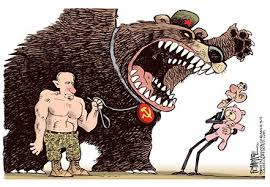 The geographical limits of the Russian military are the Near Abroad and they’ll only conquer and hold territory it can defend. No more. The eastern Ukraine is the easier territory to hold because of the large ethnic Russian population thus their occupying forces will be significantly less than it would be elsewhere such as Chechnya.  Any thrust deeper into eastern Ukraine must be completed by mid-fall before the winter weather arrives which always hampers military operations.


NATO, by charter, will not intervene militarily in the Ukraine affair. For public relations purposes, they’ve announced the formation of a 4,000 solider rapid response unit. The gray area for potential future Russian expansions lies in Putin’s psychological thinking. With respect to smaller Baltic countries, he may simply cast a dark political shadow over them to keep them in line with Russian policy rather than a costly military intervention. Putin realizes that any encounter with NATO military forces will be disastrous and result in his overthrow. Thus he’s more likely to enter countries where he is “invited” – a.k.a. a large restive ethnic Russian population.


For Putin, money is important but secondary to power and control serving as a buffer from the West. Additionally, he has unlikely “allies” and support worldwide because many European, Asian and even American firms are highly dependent on valuable Russian commodities for industrial purposes, which explains why the so-called economic sanctions are shallow and nothing more than a public relations show.
Copyright Indo-Brazilian Associates LLC 2014. All rights reserved
.
Indo-Brazilian Associates LLC is a NYC-based global advisory service and think tank with connections at the highest levels specializing in international investment, political and security risk assessments. International business is increasingly complex featuring a highly mobile professional class in all corners of the globe. We provide you the tools to successfully negotiate cross-culturally in your global business endeavors. Tell us about your challenges.  We'll get on the "Short List".

Posted by Atthehighestelevels at 6:18 PM