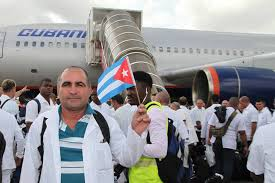 Sometimes it takes a humanitarian crisis to reveal the extent to which a foreign country with significant business investments is committed to improve the well-being of the community. Recent news reports indicate that China is contributing 170 doctors to tackle the Ebola crisis. Despite China’s tremendous investments in Africa, Cuba, which has almost none, is providing 460 doctors, almost three times as many as China. Cuba’s population is equivalent to the Chinese city of Shenzhen and half that of Shanghai.


Outside of the U.S., the other countries with substantial political or business investments in Africa include Brazil, India, Japan, Russia, South Africa and France. Most of them just wrote checks. Only Russia and France are sending medical assistance, 8 virologists and 15 medics respectively.


Cuba doesn’t engage in external activities unless there’s a tremendous upside. Decades ago Cuba exported armed revolution to Africa with soldiers to fight the apartheid South African government. Years later they changed tactics and exported doctors to Venezuela (with a smattering for security specialists for the late Hugo Chavez) and continue to do so in exchange for preferred oil prices.


Now Cuba is exporting doctors to Africa to combat a more implacable foe than the armed forces of apartheid era South Africa. However their humanitarian efforts thousands of miles away in another continent are actually aimed for political benefits a mere 90 miles from their coast. Cuba’s political profits are derived from exports.


The announcement of exporting doctors to West Africa was cleverly politically timed with Fidel Castro’s publicly released statement requesting the US to restore diplomatic relations and lift the decades old embargo. Although the contribution of 460 doctors is needed and will be well-received in West Africa, it’s exceptionally unusual for a poor country to send medical personnel to an even poorer country that’s not even a neighbor.


Cuba is putting a human face on a dictatorship with their version of “soft power” through a medical assistance contingent for the purposes of receiving favorable political considerations. This export of good will to save lives runs contrary to their domestic practice of torture and deprivation to their political prisoners and other refusniks who criticize the Cuban government’s policies.


Interestingly both the US and Cuba are over-stretched in these disciplines. Cuba’s long-time medical and security advisory service presence in Venezuela secures cut-rate price oil. The long-term US military presence in the Middle East secures and insures additional oil supplies at cut-rate prices. The question is to what extent is their participation overseas draining their military and medical resources domestically and for how long will their respective citizenry tolerate it?

Posted by Atthehighestelevels at 7:46 PM