Shadow Market Guardians - The Valkyrie of the Federal Reserve 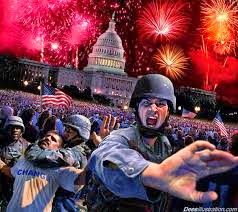 Painful as it might be, think back to the near economic apocalypse of 2008 when we were at the brink of a worldwide economic collapse. The catalyst to our fears was not just the rapid stock market downfall, it was that no one knew the values and relationships of exotic financial instruments like derivatives. Even in a reasonably transparent financial environment this lack of hard information to explain the warp-speed market downdraft exacerbated the crisis. In turn, the inability for any of the economic or financial brain-trust to pinpoint the causes to the stark downward movements to employ a stop-gap or even a “kill switch” to halt the fall early in the crisis was unsettling.
Nowadays, the shadow market, unregulated, off-the-books and legal, is the Federal Reserve’s dark angel that is propping up economy around the world. The shadow market has a positive purpose even in good economic times if it’s limited in size and scope because containment is much easier. But once it grows to the size of 800 lb gorilla you have problems. Today we’re dealing with King Kong.
Shadow markets are everywhere, notably China because of its dominant size relative to the regular economy. Then again, because of conflicting economic data, China’s economy is one large shadow market equally mysterious to the Chinese and more developed foreign financial markets. Remember that we could barely get a handle on what was going on with our own transparent market. So imagine the reaction when a similar scenario occurs in the Chinese market. You can’t control what you don’t know. Shadow markets are not “too big to fail.” They’re just too big. The shadow market is like a scud-running (flying at low altitude), fully-loaded, fully-fueled A-380 jet in heavy fog with no radar and unable to climb higher than its current altitude. The eventuality is an economic fireball.
This brings us to the post-economic crash, crowd-control. Once the markets crash, the Fed’s financial Blackwater group called the militarized police, now a permanent presence - legal and in plain sight, could be used to literally quell panic in the streets – chiefly Main Street. Their suspiciously, unfettered and rapid development has occurred during the lowest violent crime period in decades since, ironically, 2008.
Now compare this 21st century law enforcement armament growth to the period after the Vietnam War.  Then during the 1970s surplus military equipment was never donated nor assigned to local law enforcement despite record high violent crime. Today, the armed-to-the-teeth militarized police are pre-positioned with several years experience to effectively pacify the citizenry when all hell breaks loose in the financial markets again.
This development is an unsettling parallel to “Operation Valkyrie” established by Nazi Germany to insure that there is a “continuity of government” in case of a general breakdown. The operational responsibility for this was the Nazi’s Reserve Army. The 1944 plotters who attempted to overthrow Hitler, successfully modified the policy earlier. With this modification, assuming the successful assassination of Hitler, a situation was created so that it appeared as if the assassination was a SS plot and that the Reserve Army would unknowingly support the plotters.
Perhaps we should take a closer look as to what government branch ultimately controls the militarized police (jump to minute # 32 to listen) during an emergency. Supposedly as the guardians of a free society they may be ordered to suppress rights legally instead of uphold them under a policy that may remain in place indefinitely. You’ll need more than umbrellas to protect yourselves.


Posted by Atthehighestelevels at 7:44 PM