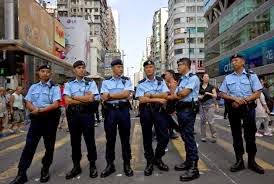 Hong Kong (HK) law enforcement, undoubtedly with explicit direction from the mainland Chinese government, applied savvy, soft containment tactics during the students’ weeklong demonstrations.
Firstly, there was no militarized police whose presence would have seriously aggravated the problem despite facing far more demonstrators than in Ferguson, MO.
Secondly, they did not apply kettling tactics which are designed to keep groups of people confined in one area for extended periods of time. The purpose of kettling is to tire out demonstrators and identify any agitators in the group. Instead, protestors were able to rotate, go home, shower, rest, eat and then return later. Although this enabled the protestors to prolong the demonstrations, this tactic was a safety valve to keep violence to a minimum. The young student protestors already feel restricted by China’s unethical and illegal application of the governance agreement, and being physically restricted as well could be the spark fuel for the demonstrations to spiral out of control. Remember, Hong Kong is one of the world’s most densely populated cities. It’s the equivalent if all 7.2 million Hong Kong residents were to occupy only Manhattan, an island measuring a mere 13 miles long and 2 miles wide.
Thirdly Hong Kong law enforcement was aided by the students’ strategy of demonstrating specifically in the business district and not marching elsewhere or demonstrating in multiple areas of Hong Kong. A mobile crowd or one which occupies multiple venues simultaneously would have posed an ominous challenge for HK law enforcement by stretching their resources and control crowd ability.  A mobile crowd can easily spawn smaller, possible more violent crowds.  Thus it was to HK law enforcement’s advantage to engage a static crowd.
Permitting a prolonged mass demonstration and letting it take its course is unusual for a totalitarian regime. China’s handling of this particular situation may be perceived as a new chapter for China in its crowd-control playbook, “kinder and gentler”. This is an illusion.
Many have compared the HK demonstrations to those in Tiananmen Square in 1989. There are critically distinct differences between them. Tiananmen Square is located near the heart of the Chinese government to which the demonstrations represented a direct challenge. Any concessions or conciliatory gestures by the Chinese government would have been tantamount to a humiliating loss of face. Remember that during period globalization didn’t exist and China still had a relatively small economy with hopes of entering the world stage.
HK democracy has been a highly transparent democracy many years. Today globalization rules and HK, far wealthier than mainland China, is geographically far from Beijing but occupies a critical post in China’s access to global business. In both instances the demonstrators were a narrow demographic: young people and students, which doesn’t worry Beijing all that much. Beijing would be far more concerned if the demonstrations were composed of a broad-based coalition of working class and all age groups which would signal far deeper problems for them. As a result, Beijing can more easily isolate one group, one class and unleash their propaganda machine to discredit this “ungrateful” troublemaker group. For Beijing if they control the media, they control the people.

Posted by Atthehighestelevels at 7:11 PM