2016 Presidential Showdown: Bush vs Clinton - Clash of the Political Dynasties 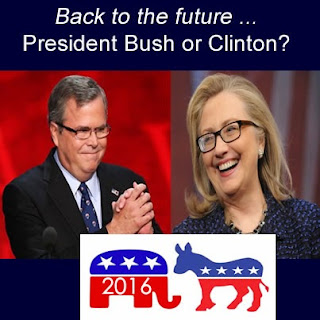 Just like a Hollywood B-movie, the formulaic script for the anxiously-awaited upcoming titanic battle between the Bush and Clinton political powerhouse dynasties in the form of Jeb Bush vs. Hillary Clinton will come to a polling station near you next November. The almost inevitable showdown will be achieved by the shear entertainment value, not by any of the candidate’s positions on the issues. Americans love rivalries whether it’s in sports (Yankees vs Red Sox) or business (Coke vs. Pepsi). And what better way to do this than on the biggest most important world stage with all the marbles at stake than the US presidency?

Because Americans are already enamored with vintage Americana everything, the not so subconscious theme for each candidates will be to return to America’s past glories of their familial political predecessors, regardless how delusional the illusion. Emotion, not logic, drives everything. We may scoff at how many countries engage in revisionist history through lies of omission and denial of negative facts.  However we’re just as guilty. Perhaps it’s a human condition especially when the stakes are this high.

Hillary Clinton will evoke the glorious and robust economic Roaring 1990s in a simpler and safer pre-9/11 and pre-gentrification world. For Jeb Bush, he follows the son & father team, the darlings of conservatives, in aggressively reducing crime at home (aka “law & order”), defeating terrorism abroad and spouting just cool-sounding rhetoric.

Despite a growing and diverse demographic melting pot, American politics are becoming increasing divisive and polarizing. This means that this campaign with politically diametrically opposed candidates will only exacerbate this trend by creating a chasm.

For the GOP, Mark Rubio is politically the de facto “advance team”, a front-runner to test the Democratic strategy. The only thing to derail the Hillary Clinton machine from securing the Democratic nomination is a scandal or public relations calamity.  In the meantime each side is actively yet cautiously positioning their political chess pieces.

Beyond the highly-charged nostalgic rhetoric, some hard questions need to be answered. Whether the GOP or Democrats secures the presidency, to what extent will they continue or change President Obama’s current policies? President Obama has laid down substantial groundwork in many domestic and international areas that are proving to be effective. For the GOP, will this then be a national political déjà vu when GOP Rudy Giuliani won the NYC mayoral elections and claimed many successes based on his predecessor David Dinkin’s initial groundwork particularly on enhancing the NYC police force. For the Democrats, how would they justify a change from Obama’s achievements should his recently implemented policies continue to be successful?

The world is a starkly different place from when their family predecessors were in office. Even their de facto mentors from that era would struggle to deal with the extraordinarily complicated problems of today. This may mean that the only thing left to distinguish each candidate will be based, as always, on image.


Posted by Atthehighestelevels at 5:55 PM