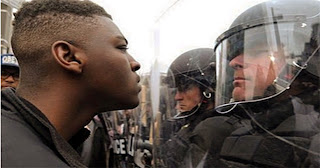 The politically expedient arrest of six police officers with respect to Freddie Gray's death has bought time for not only Baltimore but many American urban centers. It’s the calm before the storm. According to The New York Times article entitled “Prosecutor Faces Long Precedent of Police Acquittals in Brutality Case” dated May 3, 2015, convictions of law enforcement is rather low. Should several or all the officers are found not guilty or receive light sentences, there’s a high risk of a civil explosion nationwide.

During the peaceful protests looters hijacked the fragile and potentially volatile situation and sparked the fire that led to violence and destruction. These thugs are well-prepared to repeat these acts again and drag everyone else with them into this maelstrom. This may very well be a precursor to a violent summer in American cities, a real-life upcoming trailer when multiple urban areas could burn simultaneously and place local authorities in a conundrum on how to handle the outbreak.

Violence against young people of color has historically occurred unabated in the US that continues today. The difference between the past and today is social media which serves as a two-edged sword by, on one hand, vividly capturing these incidents and distributing them worldwide and as an accelerant in provoking violence reactions because of its immediate visual veracity. Additionally, the punishment of law enforcement personnel applying unnecessary force has been unusually light. This lack of justice has fueled a tinderbox of searing emotions that cannot be papered over by new regulations and procedures that aim to appease the community in the short-term but offer no enduring long-term solution.

For this reason, the community, of any American community particularly those of color, not only feels cornered, it is cornered. If you stand still and comply you’ll be shot and beaten. If you run you’ll be shot and beaten. In others words, municipal governments and law enforcement are dealing with a communities that feel it has nothing to lose and is more than willing to lash out violently. When a community is enraged, “all the king’s horsemen and all the king’s men, a.k.a. militarized law enforcement’s firepower, may not be able to quell it.

Elsewhere around the country municipal governments and law enforcement are in denial to think that they’re far beyond the urban turmoil in the late 1960s and 1970s when entire neighborhoods burned to the ground with the delusional mindset, “It can’t happen here.” But when there’s an incident captured on someone’s mobile video when the killing or maiming of a person of color by law enforcement occurs, the incident proves this adage false.

The ultimate recipe for civil disorder disaster would be a local incident in conjunction with calamity such as crowd control after a severe storm – it’s almost hurricane season - when organized, and probably well-armed roving bands of looters run amok. Even worse, because of social media, an incident can be manufactured or edited in such a way and distributed on video to give the appearance of law enforcement malfeasance that could either trigger or worsen social unrest. Rumors and falsehoods during a time of crisis are notoriously harder to disproof particularly if the falsehood is what the public wants to believe.

The containment of civil unrest will be more difficult because there aren’t any community or social leaders who command the universal credibility of those icons of the civil rights movement in the 1950s and 1960s. The bridge between communities and municipal governments is fragile and may not withstand social tempests.

From an international perspective, one country that is most likely scrutinizing this situation carefully and how it plays out is China. China is exceptionally nervous about social unrest particularly in their mega-cities as a result of their slowing economy. Domestically, President Obama’s biggest challenge may not be the street battles in Iraq, rather the street battles in the US and even uncomfortably close to the White House.

Posted by Atthehighestelevels at 7:41 PM