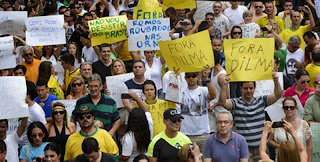 The Petrobras scandal in Brazil has metastasized to the point where newly re-elected President Dilma Rousseff is becoming increasingly politically ostracized and woefully ineffective. During the same period that the Petrobras flimflam was taking place Rousseff was a member of the Board of Petrobras. According to many reports although there’s no proof she benefited monetarily from the scandal, she’s guilty by association and an indirect beneficiary of financing and influence that supported her presidential campaign.

According to the chart in the Wall Street Journal article entitled “Brazil Cracks Open Vast Bribery Scandal” dated April 7, 2015, the alleged scandal was conducted as follows:


1.       Petrobras executives approve large projects to deal business with only a select group of construction companies, a cartel.

2.      Construction companies rigged bids deciding which one was going to win.

3.      Petrobras execs signed contracts overcharging firms and pocketed about 3% of the contract value.

Leading the charge for the prosecution is the aptly named “Nine Horseman of the Apocalypse”, a previously little known group of nine young prosecutors, the Brazilian version of the intrepid investigative journalist duo of Bob Woodward and Carl Bernstein back in the early 1970s. Their doggedly persistence eventually blew open the Watergate scandal during Nixon’s second term shortly after he won re-election, quite similar to what’s occurring after Rousseff’s second term victory.

These aggressive and fearless young prosecutors represent a much needed refreshing change in Brazil. They’re taking on powerful businesses and governmental forces at the highest levels whose crimes without punishment are historically endemic. Their tactics have resulted in more Brazilian businessmen and politicians being implicated in this scandal.

As a measure of the seriousness of this scandal has on the Brazilian president, Rousseff’s public approval level is an incredulously abysmal 13% which is about the same as France’s Francois Hollande. In a perverse twist, as leaders of large democratic countries, their respective approval ratings are below that of President Nicolas Maduro of Venezuela, a de facto autocrat, who has a public approval rating of 20% which proves how bad things are in Brazil.

Corruption and waste in Brazil are endemic. According to the World Economic Forum, Brazil ranks 130 of 144 countries with respect to Public Institutions Ethics & Corruption. It’s a historically matter of course in Brazilian politics and business similar to the behavior of Captain Renault in Casablanca (1942) exclaiming, “I’m shocked, shocked to find there’s gambling going on in here” at Rick’s Café while simultaneously pocketing his illicit casino winnings.

The public outrage which has sparked growing street protests is a result of the unprecedented scale and monies to Brazil’s largest and highest-profile company representative of Brazil as a new energy power are shocking. Petrobras was the hope of ordinary Brazilians whose revenues would provide for improved infrastructure, education, health services, and other public services as a mew prestigious world energy power and has unfortunately lined the pockets of the power elite.