Tells & Tales of A Head of State 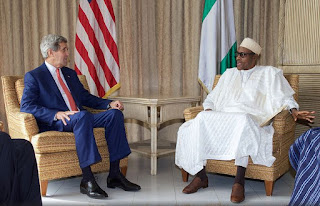 Historically exhaustive studies, both private and governmental, are conducted with respect to individuals at the highest levels to determine their true intentions, particularly when they’re about to occupy a position of power. One such individual is Nigeria’s future president, Muhammadu Bhuari whose inauguration on May 29th is significant because of Nigeria’s critical political and economic role in sub-Sahara Africa.

Earlier this month, the All Progressive Congress (APC) had an affair in which Buhari met with 15 ambassadors each of whom had a photo-op. A single photo provides only a brief glimpse of assessing body language. For this reason, a more comprehensive body language analysis is required, particularly to establish a baseline that includes more dynamic elements such as movement, speech, and language. Although only a partial assessment can be made through these APC photos, a general opinion can indeed be formed with respect to president-elect Buhari’s style.

By necessity many politicians are quite skilled at cloaking their intentions through words and body language, sometimes achieved through misdirection and distraction by being overly flamboyant. President-elect Buhari is considerably more adept at this skill due to his former military experience as Major General through his lifelong training of discipline and patience. With respect to body language he’s consistently poised in many of the photos and he demonstrates a high comfort level with a naturally erect posture, open foot and body stance, and gently clasped hands in the form of a cradle on his lap. His primary ‘tell’ is his eyes which range from joy to disinterest to contempt. His more relaxed present-day body language is quite impressive because Buhari is now a democratically elected leader in a free society vs. his tenure as an autocratic ruler in military garb.

The APC event worked in Buhari’s favor because this was a celebratory and joyous occasion in which ambassadors from near & far came to congratulate him on his election victory.  A celebration offers a significantly lower risk of confrontation and lower negative stress thus the situation is less likely to provoke negative body language. And all parties are on their best behavior during joyous occasions tend cognizant that the media is usually recording their every move and gesture.

Rather importantly to note, these encounters are between unequal official relationships: ambassador to leader or leader-elect, not of equals with the focus exclusively on Buhari in his home country where he is most comfortable. A more comprehensive analysis can be achieved in the future with direct meetings with foreign leaders and businesspeople, particularly outside Nigeria, when the agenda focuses on serious topics.

Additionally, ambassadors are usually non-verbally subservient to foreign leaders or leader-elects yet they’re not answerable to him or her. On the other hand ambassadors are representatives of their respective government and subconsciously may provide the type and style of communications their countries will have with Nigeria.

A critical note to remember is that some ambassadors are professional, foreign service officers, are highly trained and are carefully selected for important posts. This means that their body language is more subtle and harder to read. On the other hand, some countries’ ambassadorships are political favors to businessmen who supported their leader’s efforts to get elected and may have less international experience.

His toughest relationships may be with the following countries:

·         Syria: Buhari is obviously highly uncomfortable as indicated by the tensions and stress in his face with the Syrian ambassador. The Syrian ambassador’s smile is more of a smirk, as if he’s full of himself, holding his arm tightly against his body seemingly trying to use his handshake to pull Buhari towards him, a possible sign of an attempt at dominance.
·         Qatar: The handshake by both parties are normal yet there’s an unusually far distance between the ambassador and Buhari between two people from cultures favor physical closeness. It seems that Buhari’s arm, normally at a 90 degree angle to greet people, is extended somewhat to maintain a distance.
·         Korea: The ambassador utilizes an exceptionally stiff-appearance with a rigid 90 angle handshake with his arm tightly against his body appearing to try to pull Buhari towards him in an attempt to dominate. Buhari’s facial expression clearly shows discomfort with this greeting.
·         The Iraqi ambassador gives the stark impression that he doesn’t want to be there. He has a highly defensive posture by using the thin portfolio to cover his lap and genital areas and squeezing his legs tightly as if he wants to crawl into a shell. His tenseness is obvious and appears to reluctantly force himself to angle his body towards Buhari. This is one of the few times Buhari’s hands are not clasped as he drapes them over each armrest and seems to have an expression of contempt and disgust.

His easiest relationships may be with the following countries:

·         Algeria: The ambassador is sitting edge on the edge of his seat enthusiastically, almost like a schoolboy, with a full frontal pose to Buhari.  His loosely clasped hands on his lap in the form of a cradle that mimics Buhari’s who feels comfortable because Buhari leans slightly towards him. The ambassador’s jacket is unbuttoned giving the impression that he’s communicating openly with Buhari.
·         Kenya: Buhari is probably most relaxed with the Kenyan ambassador, one of the few times his hands are not clasped and are resting comfortably on the chair armrests. With respect to the ambassador, his entire body leans sideways towards Buhari and has an honest, jovial laugh. Nonetheless despite the relaxed situation and large body, his jacket remains buttoned which may indicate that he’s holding something back.

With respect to the European country ambassadors, Denmark, Serbia Sweden, Finland and the Netherlands, Buhari maintains his standard pose.  The encounters with the ambassadors from Denmark, Sweden and the Netherlands are nothing out of the ordinary. As the only female, the Finnish ambassador strangely she sits at the far end of the chair with legs protectively tightly together. Her outfit is shockingly simple and casual for such a high-level encounter and could be deemed disrespectful. The Serbian ambassador is enthusiastically making a point yet there’s a disconnect in his message. His upper torso leans slightly towards Buhari with gesturing hands but his lower body and waist point straight ahead which may indicate a mixed message.

The Japanese ambassador shows a typical Nippon respective deference to Buhari by leaning slightly forward and offering a mini-bow.

To reiterate, because the APC event represents a tight scope to perform a comprehensive evaluation, my analytical opinion provides only a peek, a hint, of the relationships that must be investigated and observed more closely under varying circumstances.

Posted by Atthehighestelevels at 6:54 PM