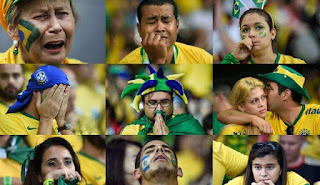 As it enters the 21st century Brazil seems to be psychologically exhausted from falling short of particular real and symbolic achievements that would catapult it to the next level – that of an upper-tier developed nation. Yet somehow during this interminable quest it always arrives at the cusp but manages to sabotage itself. Brazil seems to embody the tale of a people who build a prison and are both the guards and the prisoners and can who never escape their creation.

During the past decade there was not one, but three almost once-in-a-lifetime opportunities to catapult Brazil over that barb-wired prison wall each of which was somehow frittered away:

3.      A change of economic policies that lifted millions out of poverty into the middle class

From an emotional perspective, there are several almost concurrent events that have had a toxic effect on the Brazilian psyche. Brazil's middle class increased dramatically resulting in higher expectations. This newly arrived middle class fears that with a weakened economy, they may slide back into poverty just as quickly, a bitter disappointment after tasting the nectar of economic freedom. While the middle class teeters on this precipice, the politically connected and wealthy elite continue to maintain their lavish lifestyle and reap exorbitant questionable benefits particularly. The Petrobras scandal represents how the elite can never have enough even in a weakening economy.

In my opinion, three factors are keeping most Brazilians in economic and psychological lockdown:


1.       Brazil's humiliation at home in the World Cup to Germany by an unprecedented score, a profound psychological sign that Brazil (even if this was only a soccer match) a powerful metaphor that Brazil may not be as strong as it has been led to believe.

2.      There have been few tangible or enduring direct economic benefits to the general population from World Cup venue construction or revenues. This probably means that there will unlikely be any benefits from the upcoming summer 2016 Olympics.

There’s a title to a Brazilian comedy movie called “God is Brazilian” (2013).  The plot is that God decides to take a vacation but first he must find a suitable saint as his replacement.  If that’s the case, Brazilians must be wondering why he treating Brazil like the Greek king Sisyphus condemned for eternity to roll a boulder up and hill only to have it roll back down plunging Brazil into a collective tropical fado.

Available for speaking engagements and workshops. Contact us at www.indobrazilian.com

Posted by Atthehighestelevels at 6:46 PM