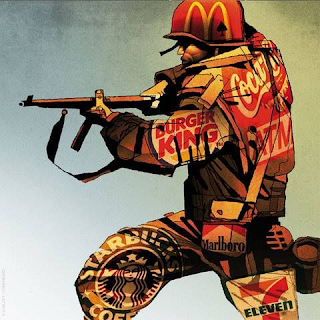 Any invader, whether military or biological, always establishes themselves through symbols throughout their newly conquered territory to remind the remaining or surviving citizenry of who’s in charge and the laws that are to be obeyed. The same methods are being applied by large corporations in their gentrifying assault in an insidiously clever way.

Just as the European countries carved up Africa, the Americas, and the Middle East centuries ago, so have real-estate developers, national chain stores and deep-pocketed, high-end goods & services corporations have done to formerly blue collar, working class neighborhoods.  Shortly after the newly arrived, pioneer-minded, artistic Bohemian class establish outposts in edgy, underdeveloped areas, the corporate invasion machinery kicks into gear. Real-estate developers, the forward shock troops, with the enthusiastic cooperation of Vichy-like municipalities as the enablers thirsting for a high tax base, undertake a “Bally boots on the ground” offensive. They begin to rezone swathes of territory for the purposes of legally jacking up the value, even going as far as applying eminent domain, the gentrification neutron bomb.

At this point, in conjunction with new construction or upscale renovations of existing buildings, a sophisticated marketing campaign is undertaken by labeling anything and everything “luxury” as justification for selling at obscene prices.  And like a virus they economically create a scorched-earth environment triggering an exodus of the indigenous residents.

Huge national chain stores like Duane Reade, CVS Pharmacy, Whole Foods, Apple Store, Starbucks, J Crew, and Dunkin Donuts, are the new corporate embassies while the high-end boutiques and artisanal food shops are the consulates. With respect to small, independent businesses this results in the demise of indigenous shops who are economically forcibly exiled or ‘terminated’ (forced out of business)  by high rents as ruthlessly done to my tailor, my dry cleaners, my shoemaker, my bodega, my hardware store in once Bohemian Williamsburg.  This corporate occupation has a spillover domino effect to nearby neighborhoods with aggressive encroachments into nearby Greenpoint and Bushwick.

Disturbingly this corporate invasion indirectly imposes a new powerful cultural paradigm. For the remaining and new residents as well as influx of tourists, the corporate establishments represent a form of mass conformity. Culturally, the neighborhood becomes a morbid fantasyland. The body language and look of almost everyone shifts dramatically as the new residents “dress [down] to impress” in a haute, shabby-chic, trust-fund hipster way.  Then there’s the look of tourists who try mightily to match the look and coolness of an artificially created cool neighborhood. They’re sadly nothing more than caricatures desperately trying to meet a set of standards and expectations determined by real estate marketing and fueled by the media who glorify the newly gentrified areas as the ‘it’ place to be. Only the long-time, pre-gentrification, and ever diminishing population of residents, frequently of color, who survived during the Mad Max years, remain unchanged, unfazed, defiant, and to ironically look like counter-culture rebels. For these holdouts there’s no need to impress anyone, are impervious to criticisms and casually defy attempts to impose new values on them.

This transformation represents a microcosm when dominant countries abuse so-called “soft power” [always backed by “hard power” such as a powerful military or with capital] and undermine the indigenous population’s way of life by coercing them to conform to new values to rescue them from their so-called backwards culture.

The powerful irony is that the same left leaning visitors and residents who are aghast the US government supporting governments of developing countries that forcibly remove poorer residents from their habitats for upscale development, yet are silent or perhaps are blithely unaware that this same pattern occurs regularly domestically.

Whether these newly gentrified neighborhoods are the new baseline of 21st century urban living or a real estate market blip before it all comes crashing down is a matter of opinion. The only way to forecast its future is to stay vigilant on the changing symbols all around for they foretell the future.

Posted by Atthehighestelevels at 7:43 PM