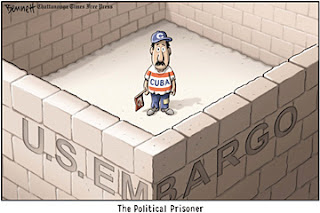 There are several similarities between Cuba and Iran with respect to the possible lifting of sanctions.

1.       Revolutionary Exporters: After their respective revolutions, both countries were anti-US, anti-western and aggressively tried to export their revolution through their military proxies and propaganda. Cuba put boots on the ground in Africa while Iran has placed military personnel in Iraq.

2.      Commodity Based Economies: Cuba’s main export is sugar cane used in barter agreements with the Soviet Union for goods including oil, and later with Venezuela. Iran’s main export is oil which they sell legally to China as an exception to the sanction provisions.

1.       The Iranian sanctions are a multi-country collaborative arrangement while the Cuban sanctions are US-specific. For this reason the political mechanisms to lift sanctions are different for each country. Additionally, because of the multi—generational one-on-one imposition of sanctions on Cuba, there’s a perception that the sanctions are more personal than economic.

2.      With the lifting of sanctions, Iran secures $100 billion in froze assets. Cuba is bankrupt.

3.      Cuba has no military presence overseas unless you split hairs and count the security advisors in Venezuela. Iran is deeply involved in supporting the Shiite militias in Iraq.

4.      Interestingly Iran represents a direct military and existential threat to its regional neighbors and economic powerhouse yet whose sanctions may be lifted before those imposed on Cuba, a small country, a small economy and which threatens no one.

5.      Trade with Iran will focus on military sales, commercial ventures and energy development. Cuba will rely on investments in non-military, non-energy industries such as tourism, communications, construction, agriculture, and pharmaceuticals which probably explains why there is no snapback provision in the lifting of sanctions against Cuba.

For Americans, because of geographical and cultural considerations, Cuba is the ‘it’ destination for frolicking on the beach featuring year-long tropical weather. Unfortunately, because of obsessive, out-dated domestic political thought, Americans may have to wait longer than expected to enjoy using their tropical umbrellas, those on the beach and those in their Cuba Libres.

Available for speaking engagements and workshops. Contact us at www.indobrazilian.com
Posted by Atthehighestelevels at 7:10 PM