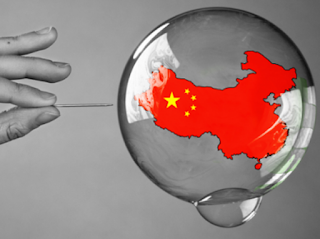 A two front economic assault is gestating simultaneously in Europe and Asia that threatens to plunge the world into another severe recession or even worse. Once thought of as quasi-indomitable institutions like the European Union and Chinese Communist Party, these institutions are now shaking in their collective designer boots with respect to losing significant credibility and in the long run possibly even more. Greece’s economic downfall is unfolding like a 21st century Greek tragedy and China’s stock market plunge is creating disturbing fissures in the world economic model.

Direct government intervention by China by pumping in billions of dollars to prop up stock prices along with other aggressive administrative tactics may be too little, too late. Though only 10% of Chinese invest in stocks (Chinese prefer hard assets like real estate and gold) vs. 50% of Americans, the Chinese market’s credibility may be seriously damaged.

The genuinely horrifying aspect is that as an autocratic country China can intervene directly and unilaterally in the markets. Yet despite their valiant efforts they may not be able to staunch the hemorrhaging. Adding fuel to the bonfire is the huge shadow market brimming with exotic financial instruments that only a handful of experts understand, a market that has no oversight and can legally bypass regulatory laws. And unlike the thousands of experts in stocks, bonds and commodities, no one knows the impact of these exotic financial instruments when they are under extreme pressure.

Should the crisis worsen dramatically, would China feel compelled to sell, even liquidate their foreign reserves or even US treasury holdings, to prop up its markets and prevent civil unrest? Such a decision would result in a significant blow to its carefully cultivated domestic and world prestige and confirm an economic situation that much worse than officially reported. Certainly China is desperately to find a face saving way out of this morass.

The Chinese government’s priority is to maintain control and credibility while preventing civil unrest. Nonetheless, the Chinese Communist Party is not monolithic and additional economic pressure can create fissures within the leadership threatening to weaken, even destabilize the Communist Party itself. For conspiracy theorists, it’s possible that this plunge could have been cleverly engineered by powerful opponents within the Communist Party to weaken control – legal enablers that created and approved loose regulations allowing conditions for this stock market bubble to froth up and spillover. Any de facto coup would result in the emergence of a so-called savior from a different faction within the ranks of the Communist Party.

Additionally, China is politically cornered because it’s a home-grown disaster which makes it difficult to convince its citizenry that this crisis a western engineered conspiracy. In Europe Greece can conveniently play the victim and blame powerful members of the EU as neo-colonialists within Europe.

For China, with respect to foreign policy this crisis could have a resultant pullback on overseas development endeavors and will ironically pursue an aggressive retrenchment and a doubling-down militarily on their Near Abroad defenses.

This developing crisis is déjà vu from 2008 when an economic hurricane was approaching the US. This time a typhoon is approaching China in 2015. The root causes may be different yet an unrelenting economic downfall will have a similar psychological impact. The world’s central banks are out of ‘bullets’ to protect their respective country’s economies and may be forced to bring a knife to a gunfight.

Institutional collapse of this magnitude or severe weakening always unleashes a Pandora’s box of even nastier scenarios and unpalatable choices including economic volatility, civil instability and the inevitable spillover into economic and political areas not directly affected by this chaos. In other words this will have far-reaching implications and everyone gets pulled into this whirlpool. There is no safe high ground.

Any temporary fixes will be just that, temporary, because there have not been any institutional structural changes since 2008 to minimize a future crisis.  No one can print enough money fast enough to paper over the cracks and prevent an impending train wreck.  As we enter unknown territory, the unspoken disturbing question with respect to whether the standard “flight to safety” financial instruments like U.S. treasuries, the historic financial lifeboats, can offer protective shelter. But this time it may not a question of having enough lifeboats, rather if there will be any lifeboats at all.

The Chinese government is still a novice concerning the risks and perils of the free market. China is like someone with a fat wallet at a casino. They can read up on case studies all they want, yet it’s altogether another matter of flailing hopelessly about in the turbulent undertow.

There are many lessons to be learned and experienced in a free market with its inevitable hard landings and crashes that are sometimes just as vicious as military battles regardless how much cash you have to support prices. The free market is like trying to control the weather. Even the best engineered structures will not protect an economic behemoth against financial typhoons.

For a stunning prescient pre-China market crash commentary on April 11 (minute 19:00) and a post-China market crash analysis on July 11, exactly 90 days later, check out the embedded links for the respective radio show interviews.

Posted by Atthehighestelevels at 6:43 PM