US and Iranian Rapproachement - A Reset in the Battle Against ISIS? 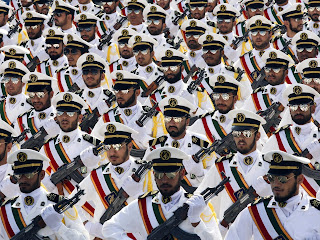 With respect to the continuing diplomatic and economic battlefield between the west and Iran comes another unspoken issue and possibly never discussed: with the possibility of the lifting of sanctions, how will this new relationship impact the battle against ISIS? Iran has invested considerable resources supporting the Shiite militia while the US has supported the Iraqi government forces with few, if any, direct coordinated military efforts.

What happens on the economic front won’t necessarily translate on the same level of cooperation and coordination on the battle front. Nonetheless it will be more difficult for ISIS to play one side against the other. In fact ISIS has more to worry about Iran than the US.

Overseas military adventures are an exceptionally expensive endeavor for any country, Iran is no exception. Which begs the question as to how Iran managed to project their military efforts under tough sanctions?

With the lifting of sanctions, Iran will have access to critical international financing which will be enhanced through the sale of oil and natural gas. Iran can then increase their military efforts in the region by providing the Shiite militias more sophisticated weaponry with greater firepower. Ironically in this role Iran may reluctantly become the US’ proxy. For the US this is a rather inconvenient arrangement yet more politically acceptable than sending in US ground troops.

It’s a similar approach and concept to how the Allies and Soviet Union battled Nazi Germany. Neither side was fond of the other, yet the war required a certain level of coordination to defeat an implacable enemy. The US provided Uncle Joe Stalin substantial amounts of materiel when the Soviets factories were in ruins.

Particularly with any major historical agreement there are always embedded secret agreements and understandings with respect to topics outside the scope of the signed documentation. Iran’s presence in the Middle East has been a vexing issue not only for the US but many Arab countries especially Saudi Arabia. The key to whether such agreements were made is to be vigilant of any change in Iran’s movement in the region, regardless how subtle. Despite all the hard-liner posturing, it’s always the specific acts after such agreements are made that confirm whether unwritten mutual understandings are being carried out.

Available for speaking engagements and workshops. Contact us at: www.indobrazilian.com

Posted by Atthehighestelevels at 7:07 PM