Yes We Can The Trump Way 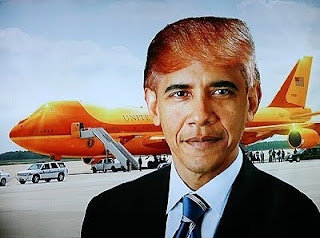 A year from now the implausible could occur when history ushers in Donald Trump as President of the United States. Last spring this very notion was viewed as something beyond The Twilight Zone. Last summer it was only a question of when he’d run out of steam. And by fall it was grudgingly admitted that he had the chutzpah and money to last as long as he did because his competition was fumbling about. It’s already February and Trump is making his political competitors, critics and everyone else eat his campaign dust.

Something similar was said about someone else back in January 2008. His name is Barack Obama whose chances of obtaining merely a consideration for a nomination for VP were pure fantasy. Mr. Obama’s road to the White House was extraordinarily challenging. Here he was, a young person of color, the son of a Muslim man, running for the highest office when America was still mourning over the 9/11 tragedy and anti-Muslim sentiment was strong. Nonetheless he eventually got the Democratic nomination and won the election utilizing new 21st century public relations tools –social media - to directly reach a disaffected demographic called young Americans.

Of course his cause was helped immensely by a free-falling economy. So when conservative voters were losing their jobs and homes, they became fed up with the GOP leadership and blamed them for the economic debacle. It was a perfect political storm of opportunity that enabled Obama to ascend to the highest levels.

Against this perfect storm back drop, Mr. Trump is now successfully tapping into a disaffected demographic the way Obama did but in his own unique way. His appeal is that he’s a brash and blunt talker, wealthy and not beholden to any particular interest. The pixie dust of his appeal is the magic of the Trump brand. As the world economy crumbles, people reach out to a savior who’s always the ultimate outsider in times of peril. And because Trump presents himself as such, he’s perfectly prepositioned to be a lock for the presidency should the American and world economy tank between now and election day. In such times logic is the first casualty because emotion trumps [pun intended] everything else.

Trump is the GOP’s version of the “Yes We Can” mantra despite the fact that Trump is a Republican in name only, a bete noir, a maverick who follows his own rules. He’s scorned in the Republican Party partly because they do not approve of his methods. Notwithstanding, he has the edge over the potential Democrat opponent Bernie Sanders because he, despite Sanders’ spot on arguments and clear intentions, loses because he’s portrayed as a socialist. Nonetheless it will be one of the closest presidential races ever.

If elected, can Trump be presidential? A smart businessman and politician know how to delegate. Whether Trump’s ego will allow him to do this on the world stage is anyone’s guess.

Posted by Atthehighestelevels at 8:52 PM No comments: