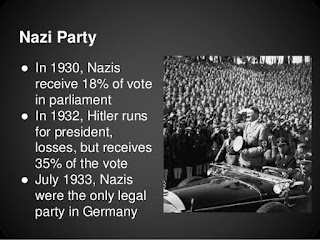 Politically the world is already leaning towards the right, following even worshipping demagogues, building walls and fences, and becoming ever increasingly isolationist. In fact, all Donald Trump has to do is secure the GOP nomination to inspire conservative and rightwing elements elsewhere in democratic countries and strengthen and legitimize autocratic leaderships worldwide.

Ironically because these parties are maternally led, they are not considered as extreme or dangerous if they were led by men whose comparisons to 1930s fascist dictators would have been inevitable to shame them to dial back their rhetoric far more than their female counterparts. It’s a savvy public relations move. Even Marie Le Pen performed coup d’etat when she removed her outspoken father from the spotlight in order to become more politically palatable and attractive to a wider audience. Europe’s economic social safety net is fraying badly while they host over a million migrants – a cultural invasion - that is competing for ever scarcer resources. These political parties will gain considerable political influence in the government and more importantly, on the streets, their de facto lobbying group, in order to influence and even dictate policies in their favor.

The irony is that the racial, ethnic, religious and other minorities within the US and Europe will be targeted just as the migrants from the Middle East and Africans in their own countries – worst case “open season” in releasing the racist horrors of Pandora’s Box. The adage “it can’t happen here’ is crumbling” is weakening. When particular conservative groups gain power, current laws protecting the minorities and disadvantaged can be initially re-interpreted, then ignored, and finally dismantled. And with fewer and fewer living Holocaust survivors to personally retell their horrific tales of such trends, living witnesses will be hard to come by to serve as a warning of this nefarious déjà vu.

So the glamorous 1930s timepiece public relations atmosphere of glorious Art Deco architecture & design, the wonders of luxury train trips, the revolution of the airplane, and art & music cleverly paper over the severe misery shared by the majority of people worldwide during the Depression. This time around our façade will be the newly constructed luxury glass skyscrapers, huge commercial developments such as the Hudson Yards to rival Rockefeller Center, and the high-tech capability with a mobile in the palm of your hand vs. the telephone. But the reality for most of the lower and middle class in Europe and the US will be more like Blade Runner cyberpunk than ballroom dancing at the Rainbow Room.

Posted by Atthehighestelevels at 6:34 PM