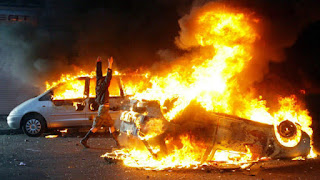 There seems to be a reluctant admission, even subconsciously, that the world is just a slight push away from tumbling into an abyss that defined the 1930s when chaos and economic collapse reigned. It was a horrific era when genocide was government policy. Specifically it was when the Nazis successfully convinced its citizenry that Jews and other so-called undesirables were responsible for their misery and deemed “foreigners” and that their forced expulsion – or liquidation - was the key not only to their survival but their future prosperity. In the 21st century the so-called new invaders are primarily Muslims from the Middle East, North and sub-Sahara Africa, over one million, who are unofficially deemed as the new security threat.

The frightening aspect is that despite the post-WW II establishment of a plethora of economic, political and social reforms and institutions created to prevent conditions of the 1930s from re-emerging, these same conditions are festering at an alarming rate. The arrival of over a million migrants last year coupled with the anticipated arrival of hundreds of thousands more as spring arrives, the political landscape and operational logistics to house these migrants will start fraying at the seams. The present encampments are de facto ghettos creating a humanitarian crisis in the making as eerily depicted in the French movie District 13 (2004). The specter of last year’s terrorist attacks in Paris heightens the real possibility of chaos on the streets of many European cities this spring and summer should there be a repeat of such an act.

The massive surge of humanity gives the impression of an invasion, alarmingly to even the most leftwing, liberal Europeans. Many of the migrants have given up hope of ever returning to their respective countries whose dysfunctional, violent and repressive governments are unlikely to change in their lifetimes. Their voyage is a one-way ticket mimicking the strategy of the Spanish explorer Cortez who deliberately sunk his ships after landing in the New World to “inspire” his men to fight or die because there was no turning back. Similarly the migrant boats and dinghies barely made it in one piece to European shores, their New World. These migrants are now committed.

The simultaneous weakening governments and challenging rightwing parties in a stagnant economic environment inspires radical and violent elements that can provoke situations that can swiftly evolve and spin out of control. The volatile combination of far-right European and mostly Muslim migrant groups can spark the type of civil unrest that would be Europe’s, particularly Germany’s worst nightmare.

For decades the younger generation have wondered how a cultivated, sophisticated, liberal and democratic country like Germany could have fallen under the spell of Hitler and the Nazis could have occurred. Now it’s déjà vu, as they now find themselves transported back in time and facing the reality of an additional influx of people unlike themselves. It’s a real-life a war game to see how differently they would react versus how their grandparents did during the 1930s. And I’m sure there are those elderly Europeans who may have supported those despicable regimes back in the day who are privately snickering at how their grandkids are shifting their opinions in favor of expelling the migrants.

The European citizenry caught in a lose-lose predicaments are those Muslims who were born and raised in Europe with European citizenship but are still considered “foreigners” because their racial, ethnic and religious backgrounds differ greatly from the general population. Under the psychological strain of fear of being surrounded, or even being held hostage in their own land, Europeans may willfully psychologically blind themselves and refuse to distinguish between the European-born Middle Eastern & North African citizens and the recently arrived migrants.

The possibility of Europe devolving into utter chaos and ruin particularly after the bloodbath of WW I seemed impossible. Then WW II occurred destroying that myth. And it seems impossible that violence and chaos would return today particularly with the establishment of so many world organizations based in Europe. Nonetheless, like a suddenly awaken virus, dark sentiments can return and spread in more nefarious ways in the 21st century because of a new more powerful method of propaganda called social media. Of course this is not historically unique to Germany. It’s occurred elsewhere in Europe and worldwide.

And finally there’s the eerie timing, almost Cassandra like déjà vu, of the now best selling publication Mein Kampf, just as anti-migrant sentiment in Europe is growing. Despite the publisher’s best efforts by prominently including explanations to indicate its falsehoods, lies and racist views, just like computer ads that appear at the margins, the readership can consciously decide to ignore them and focus on what they want to be believe.

Posted by Atthehighestelevels at 6:30 PM