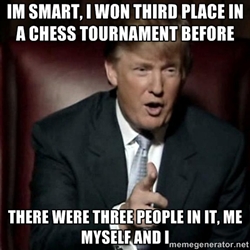 Often there’s a violent reaction, whether individually or entire countries, from one political spectrum to the other after actual or perceived suffering. Witness the pacifist nature of Germany and Japan for decades after WW II. A similar situation is occurring in the US in which millions of Americans who loathe President Obama are attracted to the Donald Trump, the anti-Obama candidate, not to a pragmatic, reasonably well-articulated, policy specific agendas by other GOP candidates. For this reason we are now witnessing the resurgence of the darker side of America that has kept itself hidden in plain sight for many years, yet now emboldened by a “savior” whose political campaign pulls no punches– figuratively and literally – headlong into possible mob rule.

What Donald Trump, who is basking in his success and perhaps at the January 2017 inaugural address, is putting himself in an impossible position – a political self-checkmate - with his devoted followership. Just as Republicans have aggressively blocked or compromised many of President Obama’s initiatives throughout his presidency, so can many Democrats as well as moderate Republicans block President Trump’s initiatives. It’s still a democracy which means he will be hard-pressed to deliver promises to give “their America back” which could possibly provoke a searing backlash. Meanwhile his followership won’t care what obstacles he must overcome, they want their American back – now!  In other words his followers who may feel cheated and betrayed could become his worst enemies.

In turn President Trump could certainly blame liberal politicians and other actors why he’s not achieving his initiatives, a tactic that can work short-term. Because his perceived reputation as a savvy businessman precedes him in “getting things done” he’ll soon realize that the limits of politics are considerably more constraining than those of big business. Utilizing a political containment strategy just as the GOP applied to President Obama, Trump’s ambitions will fall far short of his promises. As the old adage goes, “Be careful for what you wish for.”

The ominous counter-strategy is in foreign affairs, an arena where the US president has far more discretion than domestically. A politically compromised leader, as undertaken by leaders in democracies and autocracies throughout history, is to create a crisis overseas thus persuading those who oppose him to join him otherwise they would be marked an un-American at best, traitors at worst. It looks and sounds ridiculously obvious but unfortunately it works, and works quite well. Just as we were sold a bill of goods about the existence of WMDs in Iraq, so could some artificially created future crisis hijack our emotions and persuasively convince many Americans to believe yet another fairytale.

Either way, this ends badly for your salt-of-the-earth American who entrusts their savior to return them to a long gone Americana will end up as nothing more than a hellish nightmare.

Posted by Atthehighestelevels at 6:36 PM