Donald to Play His Trump Card 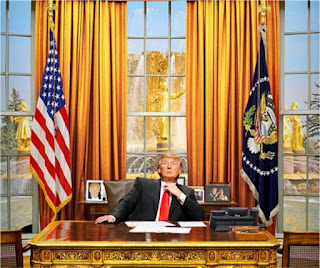 For the first time in years the presidential debate, a high-stakes pigskin gridiron battle, will probably outdraw the venerable Monday Night football. And for Donald Trump and Hillary Clinton the presidential debates represent a short playoff series before the ultimate political Super Bowl, Election Day, to determine the next president of the United States. Debates are the game changers and these are no exceptions.

This is why I believe that Donald Trump will dramatically change his game plan from bombastic verbal tirades to those which are still aggressive but more ‘presidential’. This deft chameleon shift will shock the Hillary Clinton camp and close the gap to the point not to bring Trump even with Mrs. Clinton in the polls, rather to vault him as the lead candidate. In a blink of an eye it will be the Clinton camp trailing in the polls and desperately trying to regain the lead before Election Day.

For serious sports fans, a great defense wins the overwhelming majority of championship games. A great offense can only get you so far. Well Trump has been on the offensive for months, being literally as offensive as any presidential candidate could be. I believe he’ll change gears as required to reach the summit.

Trump is more adaptable than most give him credit for and will do what it takes to win the grandest prize of all. Trump’s presidential-like demeanor will endear the millions of undecided voters. Among those undecided voters are those weak supporters of Clinton either by default or that Trump was too politically unpalatable. He’s relying on the fact that Americans have ultra-short memories and will forgive earlier verbal and behavioral transgressions and base their decisions on his statesman presence.

Polls can be highly unreliable indicators made even more confusing by the mass media’s interpretation communicated to the public which is why I believe Trump relies more on his instinct than poll figures in his decision-making which is why his actions are difficult to predict.

Trump is a survivor. He’s at the cusp of his wildest dreams and despite the high-turnover of his support team he somehow has not only survived but thrived. As the saying goes, “A man who has nothing to lose is very dangerous.” For Trump it’s a win-win scenario whether he wins the election or not. Of course as the winner he’ll be the Commander in Chief. If he loses he will have gained unprecedented respect for shear counter-intuitive gustiness and can easily claim Hillary supporters made an egregious error by voting for her when the economic climate sours.

And finally, the dirty secret of Clinton’s struggles to secure voters who would automatically vote Democrat is that many voters are disappointed with the Obama administration and/or are repelled by her husband and ex-president Bill Clinton for his alleged escapades. In others words Hillary may lose voters because of guilt by association -anti-Obama and anti-Bill Clinton voting blocks that are determined not to have a Clinton family dynasty in the White House.

As a guest panelist of experts I articulated Trump’s message to date during on an award-winning international TV  program “Fresh Outlook” in May.

Not surprisingly I believe Trump will not have a concession speech prepared should he lose the election because he honestly doesn’t believe he’ll lose. The mindset is akin to recently arrived conquerors in a new land who burned their boats to ‘inspire’ the crew that there’s no turning back. If he does lose, he’ll simply adlib.

Be prepared that Donald Trump will be in charge of the nuclear football in January 2017.

Posted by Atthehighestelevels at 3:58 PM