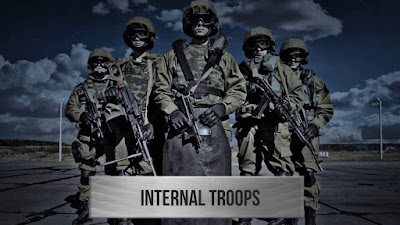 In early 2016 the Kremlin officially announced the consolidation of several security agencies to create one National Guard consisting of an estimated 350,000-400,000 personnel. It’s one powerful and well-armed security agency, a de facto personal army, an executive military protection force, under Putin’s direct command. Historically such exclusive protective services are de rigueur for any autocrat.

Interestingly, the creation of such an ominous force goes against the official government that Putin’s popularity rating is about 80%. If that’s the case, what does he have to fear especially after his triumphant walk-over victory in Crimea and successful “shock & awe” aerial military campaign in Syria to save an embattled allied in Assad all while suffering minimal casualties.

Obviously Putin is preparing himself against internal threats. Despite the recent recovery in oil prices and rise in the ruble, the two- year recession has hurt the Russian citizenry whose economic pain is not shared by the outsized and continued corruption of favored businessmen and officials.

One of Putins’ fears is that the upcoming fall legislative elections may not fully support Putin and his party which may forecast a less than guaranteed presidential electoral victory for Putin’s second term bid in 2018. In other words Putin is pre-positioning himself in case the people, his enemies and even his political allies turn against him. Furthermore a deteriorating economic situation could force the hand of the armed services that may be reluctant to engage in a bloodbath with a well-armed and loyal contingent. Such militarized protection services are always geographically stationed close to the capital insuring maximum force and reducing disloyal influence by rogue officers.

Additionally Putin may feel that his overall influence may be waning and he’s surrounding himself with a leadership of loyal true political believers who he trusts implicitly to carry out his orders because he realizes that even economic incentives to buy loyalty can’t be counted on during a severe crisis. Even his billionaire oligarchs may be willing to forgo their riches for political change.

This show of reorganizing security services that will be led by loyalists is the hardware to support his public relations’ machinery software, a chapter blatantly ripped from a 21st century autocrat’s playbook utilizing military methods legally within a technically democratic country. This is not so different from genuine democracies everywhere that use this same method by loading up the legislative branch with loyalists. The only difference is the method how power can be maintained most successfully– through the barrel of a gun or pen.

Posted by Atthehighestelevels at 8:55 AM