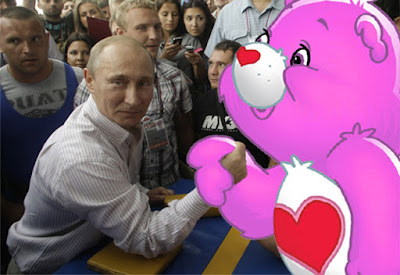 Who's afraid of the big bad bear?

President Putin has masterfully crafted a program to provoke the West into a hissy-fit about a former military superpower seeking to recapture its past Soviet era glories and domination through military adventures that challenge NATO and American might. During Russia’s recent aggressive thrust close to and beyond the Near Abroad, Russia engaged in battles that were guaranteed public relations victories, not military ones notably: Crimea, eastern Ukraine and Syria. Each encounter had limited downside risk because Russia’s military faced inferior, if any, opposition. Consider the following:

·         Eastern Ukraine has a large ethnic Russian population and Ukrainian government forces in effect felt like it was fighting on foreign soil. Although Russia denied utilizing its ground troops in this campaign, they still had to be clever to minimize the burials of “little green men.”
·         Crimea was a lightning invasion of an island whose Russian population heartily welcomed them. Ironically it was a Pyrrhic victory because Russia now assumes Crimea’s burdensome economic responsibilities.
·         Syria is exclusively an air campaign (a cost savings on body bags), a reinforcement of long-established military installations and access to a deep-water port at the behest of longtime ally, the Syrian government. As a de facto intensive training exercise Russia has been able to test their new high-tech toys under battle conditions against an opposition that didn’t have advanced weaponry to threaten them.

In each case Russia engaged their military where the West was not legally compelled nor threatened to intervene because neither Ukraine nor Crimea are NATO members and Syria is a Russian ally. Additionally each territory conquered had a sizeable Russian population. In the meantime Russia has continued their incursions over the tiny Baltic States and small nearby NATO countries.

Militarily thin Russia is like a former world-class prize fighter who gets himself back in decent shape though far from his peak fighting years. He then buys some cool-looking boxing trunks, gets a good promotional manager and proceeds to beat up drunken beer-bellied toughs in a local dive bar and avoids battle-hardened fighters. It’s all a clever measured risk that maximizes Russia’s image and minimizes their military’s short-comings. Any significant Russian ground battlefield losses regardless if it’s a skirmish would spell doom for Putin’s strongman political image. The question is whether Putin push his military too far in future ventures.

Russia is a bully in its neighborhood casting a long and dark shadow over smaller nearby countries. To these small countries Russia is a big, hungry bear seeking easy morsels. Though it seems implausible that Putin will risk any military offensive maneuvers in Europe because of potential world condemnation and sanctions, Putin’s thirst to gain respect may supersede better judgment.

On the other hand, election victories by European ultra-conservatives in 2017 in France, Germany and other countries may provide Putin a level of respect he desires and will cease his military threats. Nonetheless Putin is keeping his worst-case options open in case the European ultra-conservative parties fall short in the elections and decide change their pre-electoral rhetoric to engage with Russia with respect and as an equal. Taking the non-NATO small countries “hostage” militarily may provoke, in the eyes of the Russians an aggressive military NATO reaction, a confrontation Putin is guaranteed to lose badly.

So I ask again, “Who’s afraid of the big bad bear?”

We provide executive coaching, speaking engagements, speechwriting and workshops. Contact us at www.indobrazilian.com
Posted by Atthehighestelevels at 8:55 AM