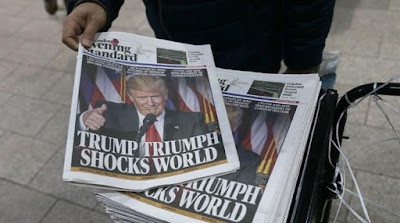 You know the feeling when you wipe the smirk off the face of an arrogant know-it-all? This is precisely the feeling the American public probably had, particularly the Trump supporters, when every media expert was proven absolutely wrong and put in his and her place.

The election result shattered the myth of the media’s omnipotency whose astounding self-absorbed attitude, armed with their 21st century statistical righteousness, failed to predict one of the greatest election upsets in US history. The media failed to provide the necessary journalistic balance required in a free press society because by fawning over the so-called political experts and pundits who themselves were blinded by the pollster data, they couldn’t see the forest from the trees. This blind faith in big data held up until Election Day when there was nary any serious consideration by the media of a Trump victory.

Big media often provides their audience with the illusion of diverse and independent news reporting focusing on the extremes, the fringes such as the racial, ethnic, economic and political divisiveness while grossly under-reporting many communities throughout the US which have held together peacefully through tolerance and mutual respect.

During the election campaign the media provoked and then matched an hysterical atmosphere during expert panel discussion by mirroring the shrilling, shouting and lambasting which undermines everyone’s credibility. This tactic resulted in nothing more than a war of decibels - whoever was the loudest won.

Big media failed miserably to take seriously the powerful yet subtle undercurrent of building in American society for years – the resentment against governmental leadership in cahoots at the beck & call of the business elite. Instead of serving as a de facto informational center of checks & balances between Big Brother and Big Business, it became increasingly more part of an alliance – conflicting alliances at that.

A brutal example of these conflicting alliances has been the gentrification of American cities for almost two decades. The common man – the working “salt of the earth” class and middle class - could no longer afford to rent or buy a decent abode, secure a decent job as blue and white collar jobs were vanishing.

This is one of many parallel trends that the media had been reporting for years yet never considered the voters’ most powerful weapon – the ballot box. Either no one saw the revolution unfolding before them or took it seriously. Occupy Wall Street (OWS) was portrayed as nothing more than a group of bedraggled punks with nothing better to do yet their message indeed invigorated and sparked the subconscious of American society. A key red flag was that during OWS’ heyday there was no outrage by the general public, a profound silence which was misinterpreted by the media as indifference.

Big Media is owned by major corporations whose business is profits and entertainment dependent on an intellectually sedentary and compliant audience. Big Media’s public image has become ever more as a parasitic public relations lap dog serving Big Brother and Big Business, part of a tyrannical troika of surveillance and mind control. Big Media has become just another corporate entity whose sole purpose is entertainment and profits over independent news reporting.

To paraphrase the infamous line brilliantly delivered by Keyser Soze played by Kevin Spacey in the movie “The Usual Suspects” with a subtle twist, the American people literally told media, “The greatest trick the [undecided American voter] ever pulled was convincing the media that he didn’t exist.” The huge block of undecided voters were master chameleons who told the polltakers exactly what they wanted to hear and then took their anger to the ballot box and voted for a candidate who was not even a member of the entrenched political establishment.

Additionally there are two other factors how the voters masked their intentions. Firstly, those voters who admitted to voting for Trump could negatively brand them resulting in being verbally assaulted and ostracized by friends and family. Secondly, because many companies appear to dictate for whom their workers should vote and “punish” those who don’t comply, they simply lied when pressured. At this point in time the ballot box is one of the few remaining inviolable areas where a citizen can exert power anonymously.

The shocking election results prove that the pollsters’ failure to correctly project the Brexit result wasn’t a one-off fluke. In other words not only can Black Swan events can occur at the grass roots level but it can percolate and emerge.

From the media’s perspective, their credibility and possibly independent news coverage has sustained a serious blow. The greatest fear is how much of the audience they lost in never taking them seriously beyond an entertainment vehicle. For the moment they’ve lost the ability to persuade or influence, at least not in the direction that they forecast, because American are fed up with being told what to do and will justifiably lie, like Keyser Soze, to conceal their intentions.

The unofficial theory is that revolutions take place during notable periods of obvious extreme stress – war, economic collapse, etc. Yet it’s been proven via Brexit and Trump’s triumph that they occur unexpectedly at the ballot box not on the streets or on the battlefield when there are powerful undercurrents.

Big Media like Big Business and Big Government proved that they’re nothing more than lemmings unwilling to break ranks and take risks especially in high stakes events.  For this reason the media’s challenge, like the Democrats, is to adapt and learn quickly with the upcoming 2018 midterm elections how to better gauge public sentiment and how it will translate to action.

Posted by Atthehighestelevels at 5:44 PM