Globally incumbents whether in autocratic or democratic countries have historically been notoriously difficult to dislodge despite high turnover of staff through executions, resignations or scandal depending on the type of government. 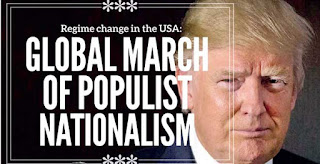 One need not engage in any profound research to realize that there are particular historical cycles in which the outcome has already been cosmically pre-ordained. It’s only a question of how it will be reached. In the forensic analysis the facts & figures are simply “backed in” to support and justify the result. There’s no scientific proof or logic to this perspective, merely the universal law of mega-trends.

This projection is not about politics rather about mega-trends seeking a balance which sometimes defy all logic and statistics. Sometimes it seems as if a confluence of events and circumstances conspire to arrive at an outcome as close to inevitable as you can uncomfortably imagine.

In a dramatic shift from the historical norm of presidential profiles, Obama and Trump are outliers. Each was the proverbial bumblebee in its own way scientifically “proven” to be aerodynamically impossible to fly. Yet not only does it fly it thrives and is essential to nature.

Against all odds, Obama got elected to the US presidency despite being as a man of color, whose father was a Muslim, less than a decade after the 9/11 attacks that fueled anti-Muslim sentiment in the US. As a Democrat, he was the forward-looking, inclusive, internationalist, progressive thinking leader during the dawn of a supposedly post-racial society in which a non-Caucasian can achieve the highest office.

Against all odds Trump got elected to the US presidency despite never having held a political office and losing the popular vote by almost 2 million. As a Republican, he is the inward-looking, divisive, nationalist seeking to revert to the country to a segregationist and supposedly happier society that made the country prosperous. Trump achieved the leadership mantle riding the wave of particularly nasty political backlash following Obama’s two-term presidency.

Additionally despite endless scandals and resignations under the current administration, the universe seeks balance. This means facts & figures are mere illusions and that the GOP will not only secure both houses in the upcoming mid-term elections but also secure a second presidential term in 2020.

This cosmic balance is achieved because Obama and Trump are equally unusually powerful disruptors from different sides of the coin.

At the same time Obama and Trump each has several critical commonalities that make them outliers:

During their campaigns Obama and Trump were each thought of as a short-term diversion as one-term leaders. After they reached the proverbial political mountaintop they were labeled as one-off flukes because of unique circumstances. However during their first term, each one has been surprisingly robust and enduring despite the hyper-aggressive tactics by the political opposition. The reason is each one found the “secret sauce” to enable a second-term victory.

For this reason I believe that Trump will more than likely mirror Obama’s back-to-back two-term duration of leadership. Regardless how many highly qualified candidates the Democrats put forth for the upcoming midterms and further along for the presidential election, Trump and the GOP will prevail simply because of the universe’s insatiable quest for balance and symmetry. Of course nothing is inevitable however this is an unfolding mega-trend that’s as close to a slam dunk as you can imagine.

Posted by Atthehighestelevels at 4:43 PM