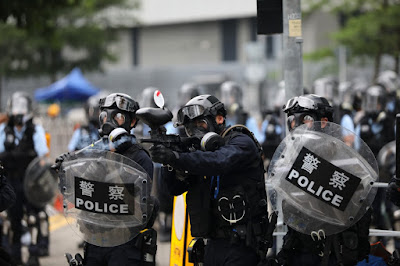 The Hong Kong crisis already into its 8th week is metastasizing rapidly perhaps past a point of no return. An overlooked yet critical component is that the PRC’s red line to compel it to directly quell the crisis is not necessarily the level of violence rather the protestors’ verbal and symbolic narratives.

The PRC has historically placed political and social ability far ahead of economic concerns. For this reason any narrative with respect to challenging sovereignty issues by the protestors may compel the PRC to act aggressively. One such potential political tripwire as reported by The Economist article “Against the Symbols of Beijing” 27 July 2019 “calling for the ‘glorious restoration’ of Hong Kong a term used by supporters of the territory’s independence.” The defacement of PRC government buildings has further tested PRC’s patience.

The PRC has two dilemmas.

1.    Firstly, aside from the immediate problem of whether to let the Hong Kong protests” burn out” or to intervene with its estimated 6,000-10,000 troops in nearby barracks in Shenzen to restore order, Taiwan is the all-important long game which has legislative and president elections in January 2020. Taiwan is certainly watching closely how the PRC handles the Hong Kong situation.
2.    Secondly, the PRC fears that the Hong Kong protests may “inspire” mainland residents who are disaffected by the economic inequity and corruption which is why the broadcasts of the Hong Kong protests are limited to anti-PRC symbols particularly defacement of PRC buildings.

As the violent protests increase and occur simultaneously at multiple sites, the Hong Kong law enforcement appears to be stretched thin. For this reason this may explain the participation of “men in white” alleged from local triads to intimidate protestors to fill those security gaps.

To paraphrase Hong Kong’s Basic Law (common law system) vs. PRC (civil law system with socialist roots) as described in the NY Times 26 July 2019 article “What is the Chinese Military Doing in Hong Kong?”, any action to request the PRC must be initiated by the Hong Kong government. However the National Peoples Congress can declare a state of emergency or if turmoil “endangers national unity or security.” I believe that the highest levels of the PRC underestimated the long-simmering vitriol resulting in an unprecedented verbal and physical ferocity by a broad demographic.

Economically the protests are having a deleterious impact on businesses as articulated in The Financial Times article dated 28 July 2019 2019 in the Financial Times entitled “Hong Kong Property Weakens on China Slowdown”.

As a highly respected international trade center continued violent protestors and possibly PRC intervention risks a steep downgrade in Hong Kong’s ability to retain and attract business. Hong Kong’s status in the Asia region is without peer as articulated in the 2019 Index of Economic Freedom.

Unfortunately I believe that the situation has a high probability of deteriorating further potentially decimating business in Hong Kong in the short-term. Here are the dynamics to explain why there’s an elevated risk of more intense protests with an equally intense reactionary law enforcement response:

There is a huge difference between law enforcement and the military. Law enforcement is trained and experienced in handling urban disturbances with the long-established local contacts to better gauge and possibly diffuse the natter. The military is a blunt instrument with no such training, no such experience and has no local relationships and for this reason unsuited to successfully handle and contain disturbances.

Hong Kong’s local police speaks Cantonese speaking while PRC garrison speaks Mandarin. Because of this linguistic difference, the PRC military can easily be perceived as a foreign occupying military force which may spark this tinderbox. A Hong Kong police beating a protestor is far different than a PRC soldier beating a Hong Kong protestor. When it comes to crowd control “one country, two systems” doesn’t work.

Logistically unlike Tiananmen Square which took place in a tightly controlled environment, the PRC has to deal with over 7 million inhabitants in an ultra-dense urban environment. To appreciate its urban density, Hong Kong is the equivalent of 8½ million New Yorkers squeezed into Manhattan.

Despite some fundamental differences between the Tiananmen and Hong Kong protests, the Hong Kong situation is unfolding just as intensely as Tiananmen 30 years ago. Additional comparisons are as follows:

Short-term investment risks are dramatically elevated, specifically in the finance and commercial trade sectors which may suffer dramatically should there be a state of emergency. The disruptive elements are likely to continue since there’s no sign of a resolution in sight. Politically and economically it’s in the PRC’s best interest to assist the Hong Kong government to resolve this conflict as quickly and peacefully without direct participation.

Historically it’s important to keep in mind that despite the horrific ending to the Tiananmen Square protests despite world condemnation the PRC economy boomed. Those are the same countries who have, for lack of a better expression “gotten over it” and for decades have purchased PRC goods by the super-container load as the PRC has risen from an economic pygmy to a behemoth.
With respect to medium and long-term investments, Hong Kong will continue as a dynamic global and Asian business hub.

The largest impacts on the Hong Kong economy and investments in the region are global economic fundamentals mostly notably the PRC’s rapidly slowing economy and stubbornly high debt.

Posted by Atthehighestelevels at 5:16 AM No comments: