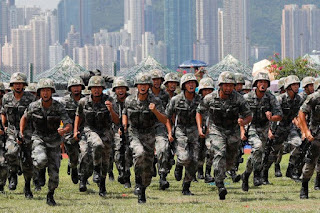 The rapidly escalating and violent demonstrations in Hong Kong is a face-off between China, an autocratic economic and political behemoth and Hong Kong, an independent (less foreign affairs responsibilities) democratically run entity under a special agreement for the next 28 years, a city with enormous global economic clout and credibility without peer.

I believe that China’s President Xi does not want to wait another 28 years to officially fully absorb Hong Kong into China which would become an indelible part of his legacy. For this reason he welcomes the challenge and “provocation” of Hong Kong residents in their mass demonstrations as an excuse to re-establish “law & order” through the Peoples Liberation Army (PLA) intervention if Hong Kong law enforcement is overwhelmed or “requests” PLA assistance to come to their rescue.

China’s relentless and aggressive encroachments on critical legal protections for Hong Kong (and foreign) citizens have been previously successfully rebuffed. However the latest effort, the extradition law, “broke the camel’s back” resulting in a seething and violent blowback by a wide and broad Hong Kong citizenry.

All President Xi requires is the right circumstances to order the PLA to intervene and create creating a de facto China Anschluss of Hong Kong, an eerie parallel to Nazi Germany’s annexation of Austria in 1938. Such a joining usually occurs under specific conditions such as peoples off similar racial and ethnic backgrounds making it by default an “internal” affair with no foreign interference. Historically Mainland China and Hong Kong share generations worth of similar experiences; the only difference is linguistic Mandarin (mainland China) and Cantonese (Hong Kong).

Historically attempts at reunification or joining on a large scale with minimal violence is a tricky affair especially whether it’s peaceful or not. The last large-scale reunification occurred peacefully thanks to an enormous luck and miscommunication in the East German chain of command which occurred on November 9, 1989, ironically several months after the Tiananmen Square massacre on June 4, 1989.

Despite this agreed upon 50-year transition intervention by the PLA could be justified as an internal affair under a state of emergency which would override the “one country two systems” adage. There’s a stark difference between politics and real politik. For this reason regardless how this all plays out, China is well aware and rather comfortable that no one will come to Hong Kong’s rescue.

The default mindset of the China government towards ethnic Chinese globally is a genetic deputization particularly nearby Hong Kong, Taiwan and including all those of Chinese descent regardless where and for how many generations they’ve lived elsewhere. In other words their first loyalty should always be to the Chinese motherland a philosophical concept that supersedes geographical and time dimension boundaries.

From an operational perspective if China is “compelled” to send in the PLA, they are facing a task never attempted: occupying one of the densest mega-cities in human history. It is not a logistical nightmare. It’s a logistical impossibility.

According to the World Bank, Department of Economic and Social Offices, as of October 2018 Hong Kong, was the fourth densest city after Monaco, Macau and Singapore. Singapore was the only other city with a population over one million. By contract Hong Kong has a population of 7.44 million or 6,300 people per square kilometer. To gain some perspective of such a density it’s the equivalent of squeezing the New York City population of 8.5 million onto the island of Manhattan that measures a mere 13 miles (7.9 kilometers) long and 2 miles (1.8 kilometers) wide (at its widest part).

It is estimated that PLA has 6,000-10,000 soldiers in barracks mostly in Shenzen where housing is far cheaper, far short of what’s required to handle large, potentially violent, and multiple mass demonstrations. According to the Hong Kong Police Force website, Hong Kong officers number 30,886. Keep in mind that the PLA and Hong Kong police are distinct entities (law enforcement vs. military) in duties, tactics, objectives and chain of command each of whom may have conflicting operational methods and objectives in maintain law & order.

A successful operation between two distinct services will require a predetermined arrangement with respect to the roles of each of these entities including the establishment of large detention centers probably requiring transport to mainland China. Lacking those resources the tactic utilized against Occupy Wall Street in NYC is “kettling” in which law enforcement contains a group of demonstrators in one area indefinitely until their rage burns out.

Even if there are official orders by the PLA command for restraint, all one needs is one PLA officer who loses his nerve and panics resulting in a bloodbath particularly sector is breached and overrun. Add in young conscripts with zero experience in crowd control and you have an internal Molotov cocktail. Interestingly more citizens may get crushed or be killed by stampedes than bullets because of Hong Kong’s hyper-density.

Chinese security has experience in handling local demonstrations on the mainland with respect to protesting workers all of which occur in well-defined areas such as factories making control and containment far easier. On the other hand Hong Kong is a Jurassic-sized labyrinth.

Additionally there’s the risk to foreign nationals that numbers 250,000 including 80,000 Americans who could get caught in the crossfire. No foreign country has or can possibly have an evacuation plan because it’s a logistical impossibility in this hyper-dense urban terrain in chaos.

If the PLA is already pre-positioned it will need a strong excuse to intervene. This possibility may manifest in a planned protest by financial workers. According an article “Hong Kong Finance Workers Stage Flash Mob Protest” in the publication The Hill 1 August 2019, these financial workers conducted a peaceful, silent protest on Thursday, 31 July. However the political tripwire that may prompt PLA intervention will be Monday, 5 August 2019 in which, according to this article, “hundreds of bank employees at 34 institutions are also planning to participate in a citywide strike beginning next Monday, with nearly 100 public and private unions also endorsing the strike.”


Posted by Atthehighestelevels at 5:22 PM