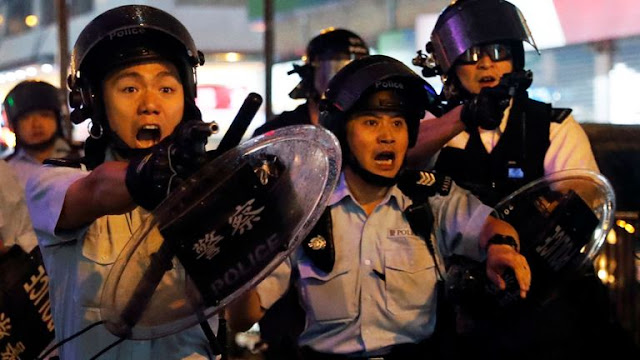 The escalating violence in Hong Kong will definitively reach its tipping point this upcoming Saturday. According to the 28 August 2019 article in the South China Morning Post the Hong Kong government has banned a scheduled mass demonstrations for this Saturday citing security concerns particularly to prevent the continued use of potentially lethal weapons such as the use of bricks and petrol bombs by the protestors.

Such a ban will certainly not deter the ever increasing number of active, on-the-street protestors encompassing a wide demographic of ages and professions.

The mass demonstrations have taken a powerful life of its own amongst a wide demographic and professional levels including the humble civil servants. So even if the Hong Kong law enforcement identified the leaders, there’s nothing they can do to prevent continued and increasingly violent demonstrations. The Hong Kong protestors represent the most dangerous adversary because they feel that they have nothing to lose. The voracious beast, perhaps the ying-yang counterpart to mainland China’s, is out the cage and is leading a dynamic – for lack of a better word - insurrection.

For this reason the decision by the Hong Kong government to request assistance by the People’s Republic of China’s (PRC) People’s Armed Police (PAP) will be far easier legally under these extreme circumstances. Additionally, because of the high-alert security threat, this would also legally allow the PRC to act unilaterally and intervene the day and/or night before the Saturday demonstrations manifest.

With respect to the PAP according to the National Institute of Strategic Studies “China’s Other Army: The People’s Armed Police in an Era of Reform” executive summary on the PAP, a paramilitary force, 16 April 2019, the PAP is now under direct military control Central Military Commission whereby before it was a dual civilian/military control.

The PAP has three objectives: domestic stability, wartime support and maritime rights protection and deals with “domestic unrest and opposition.” Hong Kong is an internal matter so it “qualifies” for PAP intervention which is already operationally pre-positioned at the Shenzen Bay Sports Center.

Furthermore, according to the report the PAP has “gaps in special operations forces and helicopters.” Such a shortfall would be provided by the People’s Liberation Army (PLA).


The specific trigger for the PAP to intervene will probably be the unsustainable and untenable role played by the Hong Kong police. Not only has the Hong Kong police reached the breaking point, according to the Financial Times article 30 August 2019 “Hong Kong Police Furious Over Government Handling of Protests”, they feel abandoned by the Hong Kong government with respect to support. Both Hong Kong Chief Executive Carrie Lam, who has been largely absent during these protests, and the PRC have refused to open any dialogue with the protestors. The Hong Kong police are in the proverbial “between a rock and a hard place.”

PRC President Xi is loath to open any dialogue because the demonstrations have focused on self-determination and pro-democracy issues which the PRC considers as separatist and political terrorism. For this reason this gives them justification in adhering to the policies of many democratic and autocratic countries, “We don’t negotiate with terrorists.”

This is exactly what has played out recently in which the Hong Kong government, under pressure from the citizens, withdrew (but didn’t cancel) the extradition law. Even with the withdrawal, the demonstrations metastasized resulting in demands for greater autonomy.

Politically the PRC has primed and pre-loaded the narrative by consistently using the word “terrorism” as the justification for any intervention. The focus has been on the handful number of radicals who have deceived and misled the hundreds of thousands to engage in “terrorist” acts. The arrest of three alleged protest leaders is merely a beau geste because the demonstrations, particularly the violent elements, have operated independently for weeks.

The PRC has indeed shown patience and constraint by non-law enforcement support of the Hong Kong government and local law enforcement and applied pressure on Hong Kong tycoons, the wealthy, celebrities and foreign business entities to denounce the violence.
In the medium term, the PRC is determined that the upcoming 70th anniversary on 1 October must proceed without a hitch or distractions.

The actual interventionalist operations and objectives will most likely follow in this sequence:

In other words the PAP will put Hong Kong under lock down wrapping in high-tech bird cage.

There are two fundamental questions once the PAP enters Hong Kong:

With the PRC’s foreign reserves estimated at $3.1 trillion sanctions won’t make a dent. Expect the politically obligatory strong diplomatic denunciations worldwide but the cost of not continuing to do business with the PRC is too overwhelming for most countries, especially Europe, to go beyond verbal jousting. It certainly didn’t discourage these same corporations from increasing their investments after the Tiananmen affair.

On the other hand, the PRC loses Hong Kong forever as a financial conduit to conduct business particularly with western investors under a highly credible legal system. With an economy dependent on services everyone loses including mainland Chinese corporations.

For a more comprehensive assessment of this unfolding crisis Indo-Brazilian Associates LLC has created an on-going report entitled Hong Kong Outlook that includes a series of published articles encompassing the political and economic dynamics of this on-going crisis.

Posted by Atthehighestelevels at 7:29 PM