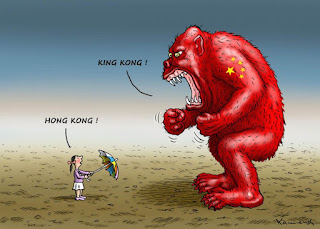 As the 70th anniversary of Communist China approaches October 1st, the Hong Kong protestors are ratcheting up their intensity in a bold “media smackdown” to determine whether they or the Peoples Republic of China (PRC) receives the most attention. It’s a powerful symbolic battle between a parade of military trophy weapons and inexperienced soldiers in Beijing vs parade of effective and proven weaponry and battle-hardened Hong Kong citizenry.

The endless aggressive protests particularly the images of protestors flaunting waving of the former colonial flag of the UK and the so-called “black hand” behind the protests of the US, creation of an anthem (Glory to Hong Kong) and desecration of the PRC flag represents a political and psychological “thousand cuts” to President Xi and his hardliners.

Possibly even more disturbing for the PRC leadership is that Hong Kong residents are not a minority racial or ethnic group, disenfranchised or poor, rather of the same ethnic background (Han), middle class and highly educated. They don’t demand food or water which China could provide and “buy” peace, rather a more precious commodity - self-determination - a concept that for the PRC is non-negotiable. The now ingrained motivation of the Hong Kong citizenry fuels its energy to conduct a high-level of intensity for months may represent a harbinger of things to come – an inspiration to aggrieved groups within the PRC borders should their economy weakens to the point of recession.

The PRC missed its unique window of opportunity to squash the protests during its embryonic stages but choose for various reasons not to and instead relied (and probably guided) the Hong Kong government and its law enforcement to settle the matter. For this reason any PRC intervention in Hong Kong will be due to the failure of the Hong Kong government, not the success of the protestors.

The PRC faces its own version of the Great Wall. Hong Kong itself is the Great Wall to protect them from the red dragon. Instead of threatening giant ape which shares Hong Kong’s surname – Kong – it’s Hong Kong’s physical profile of hyper-density of skyscrapers and narrow streets which makes it extraordinarily difficult for a large red dragon to navigate and control.

In a discussion entitled “US-China Relations -Where to Next?” held by the Hong Kong Association of New York on 16 September 2019, former Australian prime minister (and fluent Mandarin speaker), Kevin Rudd, provided three reasons why he believes why Hong Kong is a “no go” for PRC intervention:

1.    Logistically impossible because of its hyper-density and overall urban layout.
2.    The result would be bloody – far worse than Tiananmen because of the radicalization of HK residents.
3.    Any occupation would then be Beijing’s problem instead of the Hong Kong government’s.

I believe that there’s an unspoken fear amongst the People’s Liberation Army high command that Hong Kong residents are now highly experienced, battle-savvy, tactical street fighters utilizing improvised weapons and savvy use of technology to organize and form attack groups at a moment’s notice.

The ultimate humiliation and loss of face would occur if the PRC’s People’s Armed Police (PAP), the more likely force to intervene instead of the People’s Liberation Army, takes heavy losses or is defeated by, ironically, a counterpart people’s army. Can the PAP motivated by communist political dogma successfully mute a well organized, disciplined Hong Kong citizenry on their own turf which they know intimately, motivated by freedom and willingness to die for their cause? Ultimately the issue is will: who wants Hong Kong more?

Nonetheless the shear weight of political pressure may compel President Xi to take direct action despite all operational warnings that intervention would be an unmitigated catastrophe. The cost in lives would be, at minimum, in the hundreds, more likely in the thousands and economically cost China billions of renminbi to maintain a large and permanent occupational force which would be subject to unending guerilla warfare. It’s a cost that China can ill-afford with a slowing economy.

Despite the obvious history has proven that governments have made disastrous decisions. President Xi would simply follow the missteps of both the former military superpower Soviets in Afghanistan during the 1980s and US during the 2000s also in Afghanistan in a politically divisive and economically draining perpetual war which results in perpetual debt.

For those seeking a comprehensive financial and political perspective on this crisis, you may refer to a series of articles on our website entitled Hong Kong Perspectives.


Posted by Atthehighestelevels at 7:29 PM