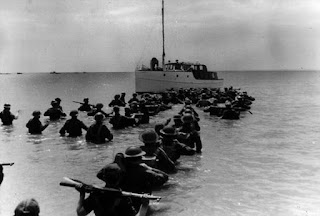 According to The Financial Times article 28 May 2020 entitled “Britain Opens Door to Citizenship For 300,000 Hong Kong Residents” the UK government is considering extending visa rights for the estimated 315,000 Hong Kong holders of the British National Overseas (BNO) passport to facilitate a pathway for future British citizenship.

The announcement is drenched with Twilight Zone dimension historical parallels because 80 years ago almost to the day on May 27, 1940 the British government successfully evacuated 338,226 its troops from Dunkirk in a week, a figure that almost equals the 315,000 holders of the BNO. Both events involve thousands of people desperately trying to leave a foreign territory from a port city whose situation are increasingly becoming perilous. Unlike the soldiers at Dunkirk, BNO holders have the luxury of time to leave if they choose.

The People’s Republic of China (PRC) recently and unilaterally imposed national security laws which supersede Hong Kong’s semi-autonomous legal system. According to the PRC the purpose is to suppress terrorism, succession, subversion and foreign interference. This allows the PRC security forces to operate openly and directly suppress the intense and violent street protests which began last June, were briefly halted due to the Coid-19 lockdowns but began resuming once again. The specifics of the new security laws will be forthcoming sometime this summer between June and August when their legislature committee meets.

Hong Kong has many similarities to Rick’s Café Americain in the movie Casablanca in the Far East, an administratively neutral ground, that provides world-class professional services, particularly finance, to all parties under a respected “rule of law”. One example of Hong Kong’s financial firepower is the IPO arena is that since 1997 they are globally only second ($478 billion) to the NYSE ($749) in IPO value, ahead of Nasdaq ($407 billion), London ($327 billion) and Shanghai ($281 billion).

A broad-based fundamental behavioral modification shift has taken place in the PRC in recent weeks under the shadow of the pandemic which has distracted their economic and political competition. For this reason it is providing the PRC a unique and narrow window of opportunity to accelerate their timetable of fully absorbing Hong Kong.

The following factors have emboldened the PRC:

Undiplomatic Verbiage: Almost as if this was a primer before the security laws were announced, Chinese diplomats worldwide have becoming unapologetically blunt in defending PRC policies and promoting the PRC agenda with brusque, non-diplomatic language.

Legal Encroachment: The PRC has systemically and progressively encroached on Hong Kong semi-autonomous rights by introducing new laws, using the Hong Kong government as its intermediary, that mirror mainland laws. These incessant efforts eventually broke the proverbial camel’s back and sparked intense and violent protests since late last spring. These so-called earlier political failures were in fact well-disguised victories that provoked demonstrations and conveniently placed the PRC in a position as the savior to unilaterally impose a draconian security law that now legally allows the PRC to directly and forcibly, if necessary, suppress these same demonstrations.

Fortuitous Timing: The new unilaterally imposed security laws are in force well before the scheduled Hong Kong legislative elections in September in which pro-Beijing parties are forecast to lose. Furthermore this has been achieved only months before the US presidential election in November. As Trump faces plummeting popularity ratings and rapidly decreasing chances of re-election (if Trump should lose) president-elect Biden would not take office until January 2021 which by then the PRC will have consolidated its efforts in Hong Kong.

The PRC’s cost/benefit analysis is based on political rather than economic objectives. It first began with the announcement by Premier Li Kegiang that the GDP will no longer be used an economic objective. Although most considered this economic measure as flawed and inflated the PRC no long feels beholden to it. As Premier Kegiang described referring to the extreme adverse impacts of the pandemic, “Factors that are difficult to predict” which confirm the GDP’s decades-only objective as a fair-weather economic measurement.

Xi’s Growing Legacy: The complete absorption of Hong Kong into the PRC fold for purposes of his legacy is his obsession. Next stop, the PRC’s crown jewel: Taiwan.

The World Needs China Regardless: The PRC leadership is counting on “it’s déjà vu all over again” with respect to PRC internal crackdowns. The PRC is banking on short western memories and economic greed & necessities such as 1989 Tiananmen Square massacre which initially brought world condemnation. Yet not long afterwards governments and corporations were doing brisk business at the start of the China economic miracle which confirms the PRC’s suspicions that western corporate profits always supersede human rights. The world needs the PRC, the # 2 largest economy, as a key engine to pull them out of this economic morass.

Finally the PRC is creating an environment of political and social stability in Hong Kong where firms can resume conducting business under a security umbrella.

Chained to the Supply Chain

Securing alternate supply chains is far easier (and more expensive) than done. Companies manufacturing widgets in the PRC can easily move their operations tomorrow, but most firms have complex operations. The PRC is well aware that setting up shop elsewhere and meeting tight specifications with new workers, logistics to receive raw materials and for shipment, and quite importantly - at scale, is an astoundingly time-consuming and expensive Herculean task. For the PRC good business is good politics. 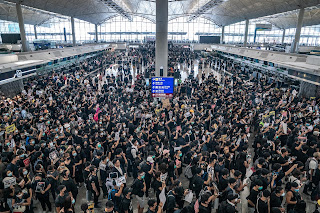 It goes without saying that the PRC has calculated that there will be a certain but acceptable loss of Hong Kong’s irreplaceable seasoned professionals but not a run to the (airport departure) exits that would hollow out the professional class. The PRC has successfully neutralized Hong Kong politically and is willing to accept the cost of losing its special trading status.

Realistically the British government is aware that it will probably receive only a handful of citizenship requests from the 315,000 BNO holders. As the global economic recession deteriorates further it would behoove BNO holders who already have a job in Hong Kong to remain rather than travel to a faraway country and compete against local citizens.

The dilemma facing BNO holders is not if, rather when, the British government announces a deadline and limit to apply for citizenship, an agonizing choice against a backdrop of potential increasing PRC suppression in Hong Kong. The remaining BNO holders would still be fearful of becoming one of the “Usual Suspects” under ever-tightening security law.

What choices do most companies who have substantial operations in Hong Kong? Many firms evacuated key personnel ahead of the pandemic lockdowns which leaves few non-Hong Kong employees “on the ground”. Undoubtedly the Hong Kong professionals can provide an excellent assessment of current matters however their perspectives are influenced by the fact that, even with a BNO, they may decide to remain in Hong Kong. In other words, the replies will favor a personal residency-specific assessment rather than a professional business one.

As Hong Kong loses more of its semi-autonomous rights under PRC’s security laws, the Board, upper management and key shareholders will have to accept the real politik – the pandemic has merely accelerated this inevitable trend.

PRC laws are often event-driven, widely interpreted, and selectively enforced based on the political mood at the time. In order to continue operating unimpeded companies with operations in China self-censure on political matters otherwise risk admonishment or punishment from Beijing. Hong Kong will have the veneer of a world-class financial center under the shadow of political and legal mendacity of the PRC. The issue of how or whether to reduce or disengage from operations in China is fraught with peril which will require tough decisions.

With respect to contractual dispute resolutions, Hong Kong is similar in many ways to Ricks Café Americain for jurisdictional settlements in mediation, arbitration and litigation matters. It’s everything to everyone; mainland Chinese companies because it’s still Chinese and for western firms because of decades-old relationships with a well-respected independent judiciary. Under PRC’s new still not quite defined security laws, the Hong Kong judiciary may be directly or indirectly politically compromised.

For this reason one immediate consideration is through contract modification for present-day, longer term (over three years) contracts for dispute resolution whether mediation, arbitration or litigation with Hong Kong as jurisdiction quite difficult to change.

The challenge is that Chinese firms may be reluctant to accept this modification for two reasons. The first is not to suffer the wrath of the PRC leadership. The second is that it behooves Chinese firms to maintain a jurisdiction advantage. Because the risk has now shifted more favorably to Chinese firms, judgments against western firms may come from Chinese companies abusing the political shift and count on support from Beijing.

There are several factors that will severely hamper PRC economically and politically with its hyper-aggressive stance:

Despite assurances the PRC has an historical lack of credibility particularly in the commercial legal area in which laws are consistently open to interpretation and are inconsistently applied. Under the Xi regime, nowhere else could this be described succinctly in the following cartoon by Banx in The Financial Times in late May 2020 as a follow-up to the new law that states insulting the Chinese national anthem is a crime: 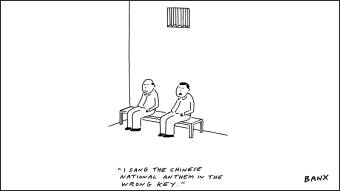 The Demise of the Xi Leadership

The Great Recession II or possibly the “Greater Recession” may embolden Xi’s enemies, of which he has many, to force a leadership change. The most favorable outcome for Hong Kong would be a pro-China yet still Communist leadership that wants to do business with the west under “rule of law” and that respects the 1984 Sino-British Joint Declaration with respect to Hong Kong’s semi-autonomous status until 2047.

In Chinese history just at the point when it seems the leadership is at its strongest, reviewing its downfall retroactively, reveals that it was at its most brittle. Determining when such a leadership reaches this inflection point has always been more art than science meaning that Xi’s leadership can continue unabated for another 5-10 years or dissolve within months.

Posted by Atthehighestelevels at 3:05 PM