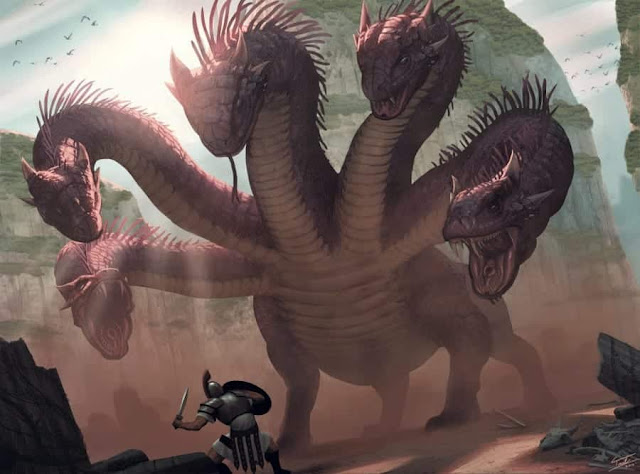 The shear size and breath of Big Tech is staggering like a corporate hydra that continues to grow even during one of the worst global pandemics since the 1918 Spanish Flu. It’s influence is far more insidious because globalization and technology promotes instantaneous worldwide communications.

During the pandemic Microsoft, Apple, Amazon, Alphabet and Facebook have added $1.7 trillion collectively to their market capitalization. Not only economically but politically they’re unstoppable and untouchable because they’ve grudgingly considered as ‘saviors” of the economy through digital services that enabled millions of employees to work remotely and prevented a total global economic catastrophe. For this reason they’ve made aggressive digital expansion a top priority and essential and even patriotic services on a scale on which only they’ve capable of achieving.

The following chart Microsoft is the Last Member of the Trillion-Dollar Club provided by Ycharts and presented 24 March 2020 by Statista, an online German statistical firm, provides a visual comparison of the market capitalization enormity and digital power of Big Tech. 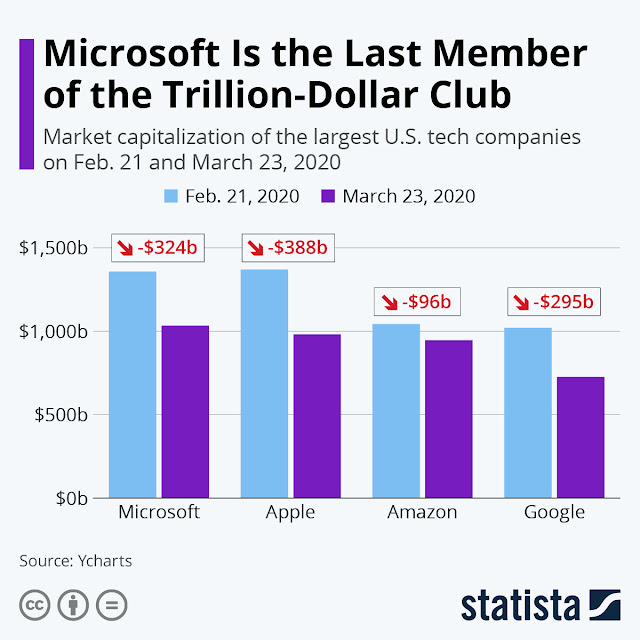 Additionally, despite the global economic downfall since the emergence of the pandemic, Big Tech’s revenue has grown remarkably as shown in the following chart provided by company filings and presented by Statista 4 March 2020 entitled Tech Giants Shrug Off Covid-19 Crisis in Q1. 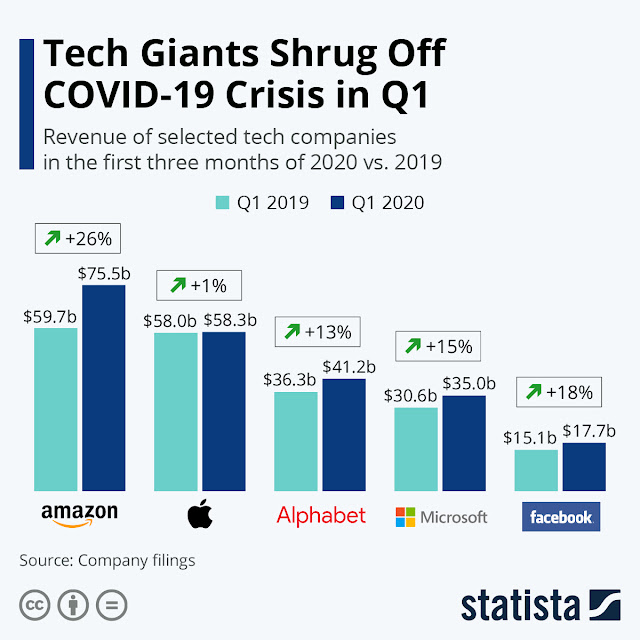 The Human Innards of the Digital Oligopoly

Aside from their obvious economic power the more insidious and dangerous trend is occurring now with respect to the composition of people who are running these oligopolies. Because of this industry’s short but historical lack of ethnic and racial diversity, the present-day [and future algorithms] have been documented to be flawed lacking breath, depth and texture. This leads these firms unable or unwilling to serve the broad-based American public fairly and efficiently.

Under the protection of propriety laws it will be difficult to assess to level of bias making comparisons with those from other tech firms impossible. For this reason decisions-making making impacting millions will be made on flawed studies. If it was a human entity artificial intelligence would choke on bad data.

Lack of diversity at all corporate levels means loss of creativity while creating false assumptions. A management that remains stubbornly ethnically and racially homogeneous promotes a rigid mindset and a myopic corporate vision. A monolithic management structure creates a working environment in which no one at any level “sees it coming.” True diversity means different colors, not variations within the same color.

The economic destruction wrought by the pandemic has created an elite and exclusive club of even larger firms on steroids serving as oligopolies with the financial decimation of the competition. This greater concentration of overall power is to the detriment of society and eliminates competing ideas and perspectives.

Big Tech. Too big to control. Too big to unplug. Despite the US Department of Justice’s preparation for anti-trust lawsuits against Big Tech firms, they’ll inevitably forced to make a pact with the devil.

Firstly Big Tech has as much and perhaps more legal “firepower’ than the government and can withstand whatever fines are imposed guilty or not.

Secondly, with respect to all fiscal and professional resources because of the pandemic the government is over-stretched. They will be too preoccupied with digging out from historical debt after spending trillions for stimulus packages. For this reason Big Tech will not be subservient to the government rather a leading partner. For public relations and “optics” any anti-trust trials will be nothing but a showcase kangaroo case with Big Tech paying some modest, slap-on-the-wrist fines, undoubtedly tax deductible.

Small tech firms will operate profitably in their shadow in the role of de facto cyber-colonies operationally “persuaded” to continue using Big Tech’s operating platforms. Alternate platforms can be made operationally efficient but will be uneconomical. It’s legal discrimination. In other words small tech firms will forever operate under Big Tech’s the sword of Damocles. If small tech firms become too independent, uncooperative, threatening or even grow too much then their sources of political and financial support can be unplugged.

In the present-day and post-pandemic world Big Tech represents an oligopoly of control over information flow. Mainstream media represents its twin flame because that industry is controlled by only a handful of mega-corporations whose interests and objectives are closely aligned. Big Tech functions in a post-pandemic society in the same way movie The Matrix presciently described in the scene with the woman in the red dress providing the illusion of choice along with “food & circus” to pacify the citizenry.

Posted by Atthehighestelevels at 4:04 PM