The Summer of Pandemic Pandemonium 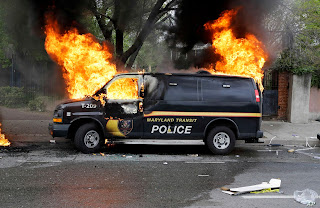 A devilish witch’s brew of festering elements is developing that may trigger a societal breakdown of law & order if they coalesce in just the right way. The catalyst is the devastating impact of Covid-19 which has injected this cocktail with steroids can unleash a firestorm of civil disorder this summer. The new “hot spots” won’t be the epidemiological dominant presence of the coronavirus rather the physical dominance of rioters and looters from every socio-economic level.

Here’s the menu of the toxic elements for a perfect storm this summer:

Economic
The suddenness of the global economic collapse occurred within weeks, faster rate than the Great Depression which took months. For many middle class Americans they suddenly found themselves staring at the possibility of becoming poor and/or homeless overnight.

The gradual re-opening of many urban areas in the US just before and around the Memorial Day weekend with the easing of restrictions will not assuage the shock, despondency and anger over mass unemployment. The official unemployment rate of just under 15% reported by the government the first week of May and a possible double-digit decrease in GDP for the 2Q2020 are Depression-like figures.

Millions will never return to the workforce because of tepid demand and corporate overhaul of the business model requiring fewer employees. For this reason businesses will open gradually, cautiously and hire only a fraction of the workers they laid off or furloughed. To make matters worse, some workers will be forever unemployable as companies use not only automation but also hire far fewer (aka younger and cheaper) workers. Even the oldest Millennials who are entering middle age will soon face age-discrimination hiring.

The following chart Unemployment Rate Jumps to Highest Level Since WW II provided by the US Bureau of Labor Statistics and presented by Statista 10 May 2020, an online German statistical firm, the official unemployment spike is visually depicted: 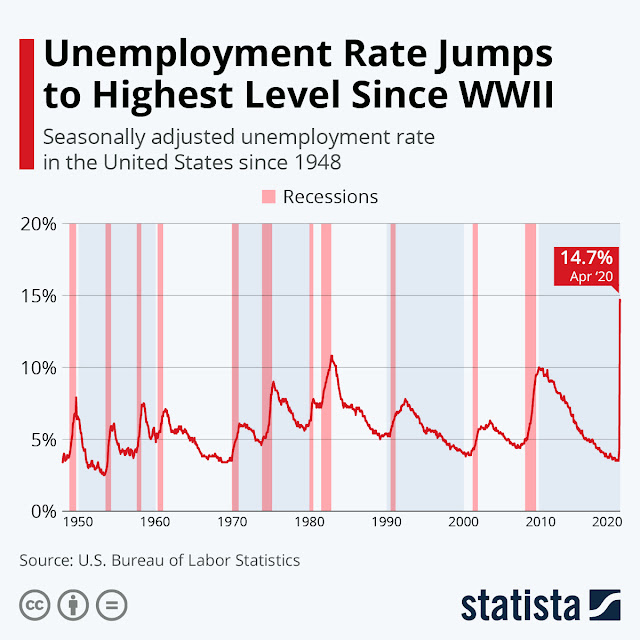 There are few from the Greatest Generation era who survived the Great Depression who could offer advice and solace, comfort and wisdom. We’ve entered uncharted territory economically and psychologically because we’re facing a gruesome economic nightmare plus a global pandemic.

According to the World Bank Poverty and Shared Prosperity report in 2015: “The United States has a Gini coefficient of 0.485, the highest it has been in 50 years according to the United States Census Bureau. In 2015, the top 1% of earners in the United States averaged 40 times more income than the bottom 90%. Like other countries with higher Gini coefficients, poverty is an increasing issue. In the U.S. about 33 million workers earn less than $10 per hour, putting a family of four below the poverty level. Many of these low-wage workers have no sick days, pension, or health insurance.”

The following chart provided by the Pew Research Center in February 2020 indicates the Gini co-efficient as a measure of income inequality among the G7 countries with the US being the highest: 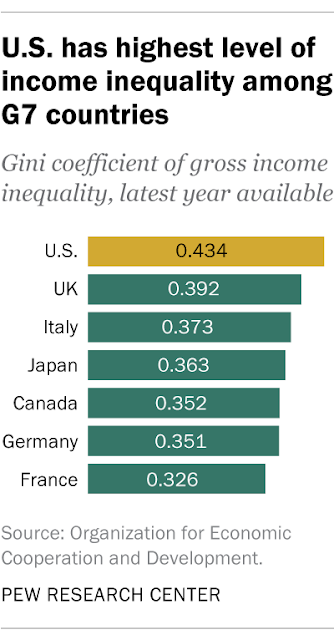 The elite have greased the ladder to success for years and now have resorted to pulling up these ladders and hunkering down in their penthouse fortresses. Until recently the “salt of the earth’s” road to success has always been by luck & pluck. Whether by default and/or design as supported by the ever-widening Gini index, American society has inexorably moved ever closer to an un-American societal hierarchical structure, that of a feudal society.

Finally according to the following chart compiled by Economic Innovation Group (“a policy and advocacy organization dedicated to empowering entrepreneurs and investors to forge a more dynamic U.S. economy”) and the US Census and presented by Statista 6 May 2020, Next Recession Brings Severe Risk for High Poverty Areas, there’s an obvious Shakespearean tragedy unfolding with the severe disconnect between the booming stock market of the 2010s and the 36% increase in high-poverty areas. This decades-old trend is the perfect accelerant for a societal meltdown. 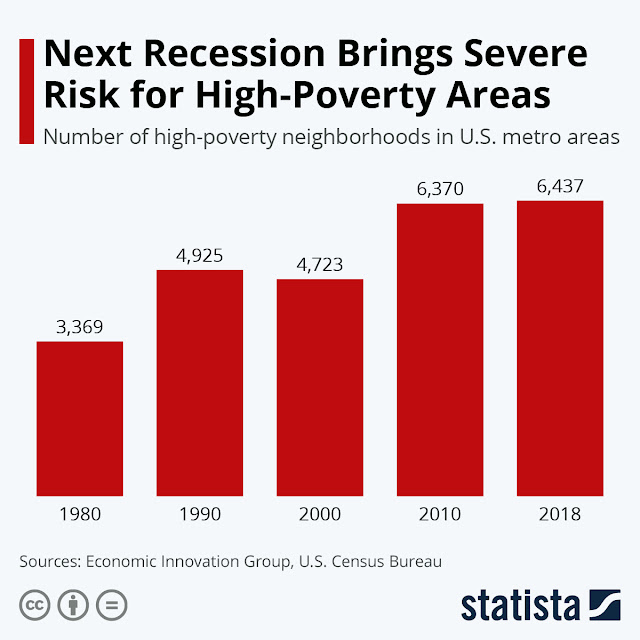 Social
The trauma of reverting back to a dangerous and violent in American society of the late 1960s through early 1980s is nothing but historical fodder for the younger generation. Overlooked, forgotten and never mentioned is the decades of low crime rates [including violent crime]. The attitudes that such levels can be sustained and prolonged through a healthy economy and effective law enforcement are misguided when a crisis emerges such as when Hurricane Katrina slammed New Orleans and surrounding areas. Now imagine the potential future chaos nationwide with this economic collapse and pandemic.

We’re experiencing the implosion of an outdated and dysfunctional societal and political model that emerged from the tumultuous late 1960s through 1970s. Those who believe those times of mass demonstrations of the Vietnam War and civil rights, and high [violent] crime rates are something of the past will be rudely awakened. The question will soon beg, “Is Washington, DC burning?”

The historical governmental tactic of “food & circus” to distract and placate the citizenry is broken because of food insecurity and lockdowns. The food chain is stretched and brittle and sporting/ art & culture events have been put on hold that limits entertainment choices to indoors

As we enter the warmer months of late spring and then summer, anger and frustration will rise in tandem with the mercury resulting in hot weather and short tempers. Already there is an increasingly defiant citizenry, a leaderless movement against social distancing and lockdowns in several states.

Furthermore the anger is fueled by surging markets at the same time unemployment is surging which brings one to the conclusion that big corporations and the wealthy are profiting handsomely - again - at the expense of the general public and protected by a phalanx of white-shoe lawyers and laws that protect them. These decades-old political and economic injustices are fuel to society’s ire.

Present-day there exists a dangerously high percentage of unemployed who have nothing to do and nothing to lose. Despair and despondency pervade American society at all socio-economic levels which increase alcohol and drug consumption that includes the higher socio-economic levels not just the historic living-on-the-edge, lower wage workers. It wouldn’t be surprising to see an increase in more drug related crimes such as property theft, break ins, well-organized and targeted home invasions and ultimately looting.

Exacerbating this dilemma is the economic fundamentals of illegal drugs prices which have been affected like all other imported products. According to The Financial Times article 6 May 2020, Cocaine Trade Caught in Disrupted Global Supply Chains, the UN Office on Drugs and Crime report, it’s far more difficult for drug traffickers to hide their product because of the dramatic decrease in shipping activity. Cocaine comes from only three countries - Bolivia, Columbia and Peru - which now must go exclusively overland through Mexico. With fewer routes to evade law enforcement, the demand side the retail price has increased dramatically.

The following Russian adage is universally applicable as millions seek to ease the pain wherever they can get it: the blue-collar father comes home one day and tells his children that the factory where he works is cutting his salary by 40%. The children then ask since he’ll get paid less money whether he’ll drink less. The father responds, “No, you’ll eat less.”

Meteorological
One final element is the hurricane season which runs from June through November. This threat represents the coup de grace to the economic and psychological trauma already suffered by millions of Americans. Last year there were no major hurricanes. But “when it rains, it pours.” If hurricane season reverts to its normal pattern it couldn’t be worse for our overall recovery.

The gathering of elements that create a meteorological storm doesn’t guarantee an intense tempest merely the possibility if the conditions are just right at the right moment. If one of these elements doesn’t reach its forecasted level, the storm could be far less intense than forecast or simply dissipate. Economic and societal forecasts, like meteorological ones, are always more art than science.

Political
I believe that Democratic presidential candidate Joe Biden’s objective and sole purpose is to remove Trump not to solve America’s dilemma. He’s a four-year placeholder for a younger, bolder, dynamic new generation of leadership – not necessarily a Democrat - that has the guts to create an equitable capitalist system. In the meantime he needs a bold & dynamic running mate because if he wins, he’ll be in it up to his ears of four years of America in crisis, a burden too heavy for someone his age.

The continuing lack of governmental credibility and conflicting policies between the federal, state and municipal levels gives the citizenry almost a cart blanche to take matters into their own hands with respect to social distancing, mask wearing and other public safety measures.

Conclusion
The aforementioned factors apply globally too. They’re particularly more intense in emerging economies because hundreds of millions have been lifted out of poverty during these past two decades. The young generation now have refrigerators, TVs, a car, and even homeownership which they consider essentials, not luxuries. The threat of losing everything in short-order will be unacceptable even if such a loss is exclusively economic and non-political.

In the US the level of desperation at all socio-economic levels is building to powder keg levels. For this reason the present-day level of security and civility is untenable. The extended lockdowns have turned us into caged animals that will bring out our primal instincts and behavior with the realization that the government doesn’t have the financial or operational capacity to protect and feed us. It’s a brutal assessment of what the early 21st century society is facing. How this plays out is contingent on how those elements inevitably coalesce.

Posted by Atthehighestelevels at 6:55 PM