The Second Surge | The Social Firestorm 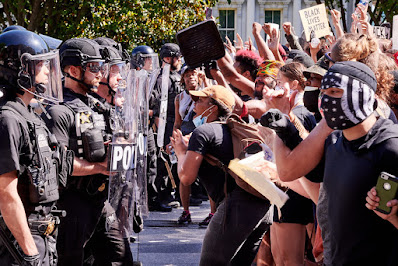 The nationwide re-openings will provide a temporary respite from the civil unrest caused by looters and agitators who gave the peaceful protestors a bad name. However demonstrations against injustices and systemic structural injustices particularly against minority victims, will be revived as the summery spring turns into the sweltering summer.

The second surge will have less to do with Covid-19, a destructive virus, rather more with the broad demographic cross-section of citizens who themselves represent the moral and ethical vaccine against a decades-old, deeply corrupt, self-serving leaderships from both parties. With the reduction of pandemic deaths and hospital admissions, Covid-19 has become merely a subplot in a far deadlier crisis.

The present-day authoritative acting leadership shows signs that it’s possibly in its political death throes simultaneously a positive and dangerous sign. On the positive side it opens the possibility of a new class of government yet dangerous because such present-day leaderships never give up power without a brutal fight, legally or otherwise.

We are witnessing the collapse of the Trump administration, a self-destruction with a pathetically B-movie level of entertaining bunker mentality elan. Trump has erected a physical real-life inner circle, a newer & higher fence around the White House, to protect him from American citizens. What’s next? A crocodile filled moat? Nixon was loathed by millions and was alleged paranoid but never resorted to such levels of desperation by constructing a physical barrier.

This increasing paranoia of political encirclement is growing as fissures erupt within the GOP. Members are breaking rank because Trump’s self-destruction and meltdowns have changed the odds of a re-election loss from plausible to close to being inevitable.

As events become more intense and urban security becomes untenable, the question becomes to what extent will level of suppression will be imposed by law enforcement, the National Guard and perhaps even the military? Furthermore will the imposition, as determined by the governors, of new curfews and the tactic of kettling enrage the citizenry?

The leadership’s increasingly heated rhetoric is merely an epithet away on a “hot” mic from igniting triggering an historic social conflagration. This begs the question: who is the anarchist?

Pouring fuel on this possible Gotterdammerung are the fanatical followers who will embrace their 21st century role of the Lost Cause perceiving this moment in history as their political & social last stand against those racially/ethnically and religiously unlike them and willingness to go down in a blaze of delusional glory.

There has been a disquieting disconnect between the surging markets and the reality of mass economic suffering. Investors seem to be focusing on the silver-bullet vaccine for Covid-19 that will solve the world’s economic problems rather than the fires burning at their feet. When the protestors occupy Wall Street then their perspectives will change from an academic exercise to real-life.

The recent unemployment decline, whether fact or mirage, will remain stubbornly over 10% for many months to come because of the economic structural damage. The present-day mini-burst of economic activity is occurring because after weeks of lockdowns citizens need to purchase necessities not luxuries.

The phony market recovery will continue until the Fourth of July at which point one can expect a summer hellscape with brutal steady market degradation and resurgence of protests that will continue their campaign to reform and/or create a new socio-political contract until the January 2021 inauguration.

Biden is the well-meaning “nice guy” placeholder not a catalyst for societal change. This is why Biden must “choose wisely” his vice-presidential running mate since Biden will be a de facto lame duck because of his age and diminishing ability to handle the unworldly post-election domestic and global challenges. In a leadership role reversal Biden is the window-dressing place holder while the vice president will be the person actually taking charge.

Neither major political party, most damning the Democratic party, has made little progress at remedying the crumbling societal structure despite an astounding historical fiscal surplus during the 1990s.

The objective of the Democratic Party in the upcoming presidential election is to vote out a corrosive president and his minions and replace them with a “normal” leadership and restore America’s leadership and prestige overseas. Regardless the intractable problems that exist today will still be with us heading into the 2024 presidential elections however these can be tempered and contained by a more responsible leadership.

This is the make or break watermark year whether America will still maintain its global prestige and leadership abilities. All empires die however the issue is whether the US can avoid the perception being at the beginning of end of its dominance.

The Democrats must create a powerful surge to improve socio-economic matters otherwise a thoroughly overhauled and reformed GOP with new, younger and energetic members will retake the White House. That’s not to say whether it’s a good or bad thing, rather if there’s going to be unquestioned real competition for the Oval Office in which demonstrably solid results count. Only then can the US regain its role as a world leader for a bit longer.

Whether the Democrats or GOP occupy the White House, by 2024 the political landscape will be nearly unrecognizable as the president-day late middle age politicians retired or become irrelevant replaced by a robust, younger generation of leadership.

Posted by Atthehighestelevels at 5:08 PM