Descent into the Urban Dystopia 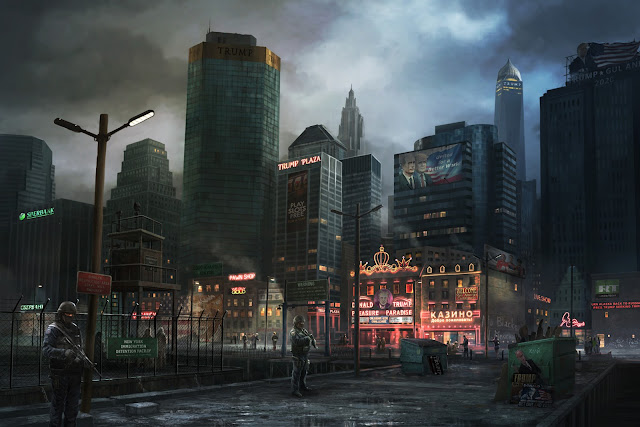 Because of the deeply embedded skewed and discriminatory government and private industry policies and laws which have strangled the non-elites for decades, cure or control of the Covid-19 virus and change of administration to the Democrats will merely be a speed bump on the way to a severe societal breakdown.

Here are a handful of components that are rapidly converging and will contribute further to the frustration of most Americans.

Coronavirus is still devastating societies worldwide with vicious resurgences that will continue for months or even years even after an approved vaccine(s) is developed. Suspicions over a new vaccine, wherever it may be approved, will be rife and justified which may lead to mass non-compliance.

If the government at all levels has no compunction on providing misinformation or disinformation on less critical matters, why would they be forthcoming with a vaccine? The proverbial and literal governmental Good Housekeeping stamp of approval for a vaccine might be the same risk as eating fugu (blowfish) prepared by a part-time, short order cook who learned the technique via a Zoom class.

Furthermore, the troika of government, Big Tech and Big Pharma provide the perception that personal data collected with respect to testing will lead to eventual draconian bio-surveillance in the near future. Worse yet despite assurances this medical information may be vulnerable to hackers who’ll sell this to your worst enemies.

The tragedy is that the government, Big Pharma or Big Tech for decades have been unable to establish credibility with the citizenry and customers despite their AI-driven marketing and public relations sophistication.

As waves of bankruptcies hit large corporations with the resultant mass layoffs it’s a matter of time before they affect smaller to medium size corporations. This trickle-down trend has a compounding effect because it adversely affects suppliers and their employees. The desperation is palpable because unemployment and other stimulus benefits are running out. This then begets the vicious cycle of more crime by normally law-abiding citizens to secure essentials, sometimes violently, up to the breaking point of looting.

Law enforcement nationwide is suffering through extensive retirements and resignations and lack the manpower to keep the peace. To make up for that shortfall they can escalate tactics and apply greater firepower or back off leaving innocent citizens vulnerable to local thugs. The uptick in violent crimes is not an anomaly rather a steady trend that will not be reversed anytime soon because of aforementioned dynamics.

The following chart presented on 5 August 2020 by Statista an online German statistical firm entitled Major American Cities See Sharp Spike in Murders, 5 August 2020, and developed by Jeff Asher, former crime analyst for the city of New Orleans and co-manages AH Datalytics, a consulting firm, provides a snapshot of the violent crime trends in major US cities 2019 vs. 2020 June YTD.

Social-economic fissures are widening and becoming deeper crevices than what’s actually acknowledged. Government’s credibility has gotten far worse and corporate public relations campaigns supporting BLM is merely a beau geste stop-gap window-dressing to appease the protestors’ valid complaints of the lack of diversity in the workplace. One can’t solve the problems of a fiscally bankrupt government if its morals are bankrupt.

Hollowing Out of Urban Areas

Ina dramatic demographic shift the wealthy and more recently the middle class flight to the suburbs and rural areas is more an escape from potential future urban violence, not necessarily the virus. Anecdotally evermore urban middle-class residents are renting moving trucks which triggers the process of de-gentrification.

The wealthy and upper middle class have second homes or can afford to buy or rent one. Recently the middle class is seeking suburban and rural accommodations which are affordable compared to urban abodes. These classes can readily work remotely, eliminate commuting costs and prepare meals at home.

For the less socio-economically fortunately which is code for people of color the only option is to remain in the urban cauldron. The only alternative is if they’re evicted they may be lucky to move in with friends and family who are probably also stuck-in-place urban residents.

In the worst case scenario, using a dystopian perspective we may witness the emergence of the new Trump Towers for the newly evicted lower middle and lower class. Overwhelmed by the homeless situation the city may arrange for them to move into vacant luxury towers throughout the city ironically located in the same neighborhoods where they formerly lived and were priced out. Perversely it’s affordable housing at its finest – a homeless shelter with gold-plated toilets - the new wave of evicted and now homeless families, the twisted irony of those of the socio-economic nadir occupying 21st century apex architecture.

Those at the bottom of the socio-economic pyramid may end up as squatters. The risk is that they may occupy condemned and abandoned buildings with questionable structural integrity such as the recent collapse of an unoccupied building in Williamsburg.

The most vulnerable are the elderly and those approaching their twilight years with few assets on a fixed income. It’s a Shakespearean tragedy in which historical events have come full circle for those who were coming of age during the turbulent 1970s and early 1980s. They were young, fast and nimble and just starting careers and families.

As the cities devolved into mini Dante infernos enveloped by violent crimes the elderly during the 1970s were soft targets and trapped because were unable to afford to move, or had no family or friends, or most of whom had moved or passed away or themselves in the same predicament.

Nowadays aging baby boomers are in a similar predicament – almost déjà vu what their grand-parents or older aunts and uncles suffered. Although social media enables them to stay in touch with far-flung family & friends there’s no substitute for someone next door or in same nabe to call on in case of an emergency.

The following chart entitled Over 40% of US Renters Now At Risk of Eviction presented by Statista on 28 July 2020 show a dire picture if the economy doesn’t make a V-recovery and/if the next stimulus checks will be sufficient to cover essential expenses and prevent or delay evictions.

With respect to business according to the Partnership for NYC a trade group for largest local companies, 16% of firms plan to move jobs out of NYC and 25% plan to reduce current office space at least by 20%.

Furthermore the much needed stimulus checks have not been spent for frivolous items rather the essentials. In the following chart presented by Statista 28 July 2020 entitled How Americans Used Their Stimulus Checks, provide a breakdown of household expenditures.

No Food, No Circus

The huge dilemma for government to maintain social order is that the citizenry has been denied both food & circus for purposes of containing the spread of Covid-19. Social distancing requirements, cancellation of major sporting events and art & culture and other restrictions have left the citizenry with limited social interaction outside their homes and little entertainment other than their TV and mobiles.

The signs of upcoming unrest are literally on the wall in the form of graffiti. The demise of the Disneyland NYC has begun when NYC, because of severe budget problems, eliminated the annual $3 million for graffiti removal according to the Wall Street Journal article 20 July 2020 entitled NYC Businesses Fret as Graffiti-Removal Program is Axed.

The 1990s broken windows policy in NYC is now graffiti, no longer ‘art’ rather an ominous present-day protest, a return to the bad days of the 1970s and 1980s. Then again it’s possibly worse because how can you write (graffiti) on broken windows?

Nationwide several groups have blatantly co-opted the Black Lives Matter (BLM) movement none more evident than in large urban cities which are predominantly Caucasian. These are the same cities that historically and right up until the arrival of Covid-19 were quite discriminatory against people of color who had trouble finding good housing or securing a job or promotion despite having the same or even superior qualifications as their Caucasian counterparts. For convenience purposes today people of color are their “best friends.”

Amongst US cities with a population of at least 500,000, Portland has the highest Caucasian population percentage wise at 71%. For this reason their protests can be perceived as disingenuous, riding the coattails of the BLM movement, and pushing their agenda from the back of the bus.

Furthermore, it wouldn’t be too hard to imagine that some of these protestors are disaffected and disillusioned Trump supporters who are using the BLM as a cover to convey their disapproval of government – local, regional and/or national - but not specifically targeting the GOP or Trump himself. For this reason genuine BLM protestors gets the “blame” for unruly protests.

Military Firepower at the Ready

The dark shadow in the background yet quite noticeable is the militarized law enforcement. Already “battle hardened” and experienced by earlier protests, the upcoming presidential election will provide more than enough political fodder for various groups to legally protest in the streets but whose protests attract bad actors determined to sow discord & violence.

Militarization of law enforcement behave like a foreign occupying power and the citizenry who view them as an occupying military force. With their firepower image and perception is everything. For example the New York Police Department has a record number of officers retiring and applying for pension benefits. Why? Because they’re between a rock and a hard place – the toughest of jobs whose responsibilities and risks have elevated their stress levels exponentially. This trend has bee replicated throughout the country.

This means fewer available and far less experienced law enforcement personnel with military-grade tools for crowd control. What can go wrong? Everything.

Markets will continue to rise albeit unevenly because we’re closer to developing and distributing a vaccine – albeit in months or even a year - with the false perception that the vaccine itself is a magic bullet both medically and economically to trigger a V-shaped economic recovery. Up until such time that a successfully proven and approved vaccine is developed, approved and distributed, the market will continue to rise.

Despite the threat of increased social unrest, the strategic vision is that a healthy population will beget an economy that will be back on track, albeit following the fundamentals of a recovering economy. The word “recovery” in this era means rising to the level corresponding to continued high unemployment, personal and commercial bankruptcies, low demand for goods & services and almost bottomless debt.

Regardless how awful the economic indicators are, for political and crowd-control purposes, the word “depression” will unlikely to be uttered by any government agency or corporate entity even if the economic data match or even exceed those of the 1930s Depression. The extreme measure would be for the Federal Reserve to declare a Bank Holiday which nowadays would be political dynamite but perhaps the only way to halt the outflow of money from the system

Posted by Atthehighestelevels at 2:24 PM