Trump Has the Democrats Right Where He Wants Them 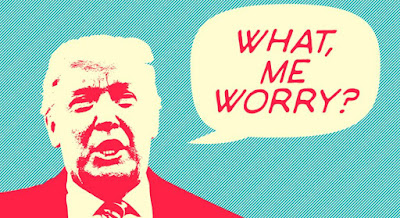 Trump coyly channels the methods of Chinese warrior poet, Sun Tzu, as the embattled victim and underdog who everyone dismisses at achieving the impossible yet somehow, whether by design or default, manages to grab victory from the jaws of defeat.

In 2016 a confluence of hard-to-prove yet plausible subliminal misogynist and racist factors enabled him to snatch the mantel of Commander in Chief from Hilary Clinton’s sure victory as follows:

·         Misogyny: The publicly unacknowledged powerful misogynism in American society against a woman to hold any position of power particularly at the apex such as the US presidency.

·         Political Ying Yang: Hilary Clinton’s “love her or hate her” aura even within her own party.

·         Racism: Although America prospered under two terms of the Obama presidency, there were still many Americans who still could not accept or respect a non-white president in the Oval Office. The strong possibility that the next president would be a woman pushed them over the edge into the “waiting with open arms” Trump camp.

The 2016 election was supposed to be the Democrats’ slam dunk victory that never occurred - a Twilight Zone nightmare in which history was turned on its head that changed the future fantasy musings “What if Trump won the presidency?” into reality.

It’s 2020 and déjà vu all over again with eerie parallels except in a different key. Despite Trump’s appalling record in every domain, worsening dysfunctional behavior, and narcissistic betrayal of the working class he vowed to protect, all exacerbated within a pandemic firestorm, he has the Democrats where he wants them.

The present-day polls on average indicate that Biden is ahead in double-digits which is shockingly low considering Trump’s aforementioned egregious performance and says more about Biden’s future fortitude than Trump’s abysmal track record.

In 2016 Trump’s campaign was disorganized and in shambles seemingly without direction yet he still won the GOP nomination. And prior to the presidential election despite his discriminatory-laden, explosive verbal vitriol and never having held political office, he won the presidency albeit as determined by the Electoral College.

Trump represents that uncomfortable analogy of the person or team that wins at each step towards the championship in an extraordinarily unconventional way in which everyone figures these tactics (or lack thereof) couldn’t possibly be sustained to secure the championship. Every sports fan knows of such a player or team like Trump.

When the player or team has to defend the championship, regardless how well-prepared opposition, somehow the defending champion using “like water” tactics somehow defends the title such as that of Commander in Chief.

With so much riding on America’s future in the midst of a pandemic and global economic turmoil the November voter turnout may be disappointingly low for the following reasons:

Finally one of the darker elements in American society that will hurt the Democrats is the perception of Democratic vice-presidential nominee, Kamala Harris, in a déjà vu moment as both the misogynistic and racist elements remove their political masks in the voting booth.

Mrs. Harris is brilliant, motivated, young and exceptionally qualified. Sadly many of these darker elements will see her as a female Barack Obama and in a perverse role-reversal, equate her as if Obama will be the Vice President to potential President Biden. In other words they view not just another non-white person in an apex position of power rather a non-white female, whose parents like Obama’s, have immigrant origins.

It matters not that both Harris’s parents were geniuses when they arrived to study in the US and became the ultimate American success story. In their absurd paranoia these darker elements perceive Mrs. Harris as the daughter of non-white foreigners who are engaged in a continuing effort to destroy (white) America’s “way of life.” For all the aforementioned reasons this presidential election will be extraordinarily tight.

From a personal perspective, with a double-digit lead in the polls heading into the Labor Day weekend, if the Democrats lose this election you won’t see another female nominated on the Democratic ticket for president or vice president in our lifetimes.

For years everyone has underestimated Trump. His ultimate personal and political victory would be a re-election victory and to redefine the role of lame duck - a lame duck with claws.

Posted by Atthehighestelevels at 12:07 PM