We naively assumed that the 21st century would usher in an era of light & progression that instead has turned into darkness and depression in less than 20 years - 9/11, the Great Recession and present-day pandemic. We’re still suffering from the residual psychological and economic effects from 9/11 and the Great Recession before the pandemic poured grease on the rungs of the ladder to recovery.

In the meantime corporations have leveraged the quantum advances in technology to super-charge our mindless charge down the consumerist road to financial (and sometime moral) perdition persuading us, as the adage goes, to “buy even more stuff we don’t need with money we don’t have to impress people we don’t like.”

There are particular insects in the animal kingdom that infect their victim’s brain to control them to be consumed by another to gain access and feast to this third party. Corporations have duplicated this quirk of nature through diabolical psychological genius and well-craved campaigns corporations targeting the consumer to engage in a destructive cycle of upscaling their aspirational dreams to the brink of personal financial insolvency.

In the early stages of internet age our devices were raw & basic such as the most beloved Startac mobile that had a reasonable useful operating life. It wasn’t until we approached the 21st century that connectivity to the internet from your desktop, laptop and mobile for other than emails and basic web browsing information justified the purchase of a far more sophisticated and expensive electronic device.

Eventually the useful operating life of the newer devices became much shorter necessitating the purchase of a new often pricier one. Despite the consumer’s assiduous efforts at protecting them and following the operating manual’s care instructions, the devices seemed to “self-destruct” on cue. Even if the warranty was still valid or an extended warranty was purchased, the repair of the device was just enough to have it limp along – perform basic services - like a doughnut wheel spare tire to safely get your car to the nearest service station.

For those fastidious consumers who actually protected their devices with alien strength cases those efforts turned out for naught because of supposed upgrade in technology as those devices could not run on the advanced systems which again necessitated a new purchase.

The short shelf-life of electronics parallels the policy of the Tyrell Corporation in the movie Blade Runner (1982). Because the newer replicants, Nexus 6, were so advanced and potentially more dangerous in the long-term, that the Tyrell’s creators built in a self-destruct four-year lifespan. Ironically the time-period of the movie is 2019 and the lifespan of Nexus 6 replicants is slightly greater than the handheld devices we have today.

Hard Sell on the Software

If you were lucky enough to purchase a device that was bullet-proof and could accept upgraded packages, the software upgrades and choices hit your wallet hard. “Package deals” with “value” gave the illusion of choice when the firms profit greatly when you make their choice not yours. The so-called choice of package deals is constructed in such a way that it’s impossible to itemize services to allow a fair comparison between them.

Finally the illusion of quality entertainment over dozens of channels is nothing more than regurgitated programming across the channel spectrum. This accelerates the dumbing down of Americans to make them more complacent and question less. It’s an insidious brainwashing, a psychological anchor wrapped around the minds of Americans that pulls them to the bottomless pit of stupidity and ignorance. The slick public relations marketing serves as the psychological emulsifiers which facilitate intellectual digestion.

The high turnover of short shelf-life hardware translates to higher profits for manufacturers that compels the almost bankrupt consumer to pay increasingly more. It’s perversely ironic they corporations can make sophisticated accurate projections of sales and profits for the next 5 years but can’t manufacture (unwillingness) a device that will serve the consumer for the same 5-year period.

This policy is ultimately self-destructive when applied in an extended recessionary cycle because short-life planned obsolescence exclusively feeds short-term profits. Once consumers unplug because of survival necessity – to put food on the table and keep a roof over their heads – then revenue dwindles and profits dry up. In this global recession this can occur dramatically quickly.

The following chart entitled How Long Does Apple Support Older iPhone Models?  furnished by Apple and presented by Statista, an online German statistical firm, indicates that the newer Apple iphones have an increasing longer life cycle than older models. What is not mentioned is that in order to “compensate” for potentially lower turnover is the considerably higher price for these newer models. Furthermore these newer models with greater memory can accommodate more memory to runs its expanded subscription services offerings and AI capability. 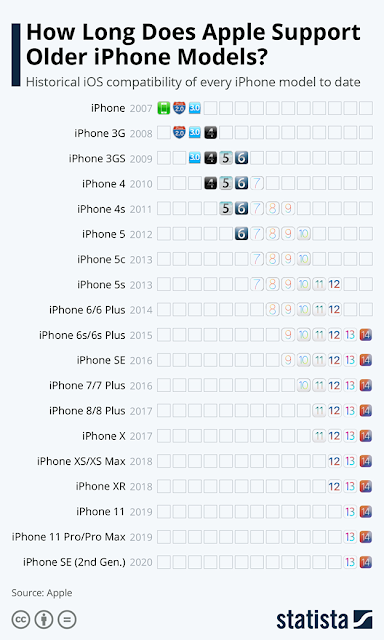 The following chart entitled Apple’s $50 Billion Side Business provided by Apple and presented by Statista supports the explosive growth in its subscription services as becoming an ever more important component in Apple’s revenue. 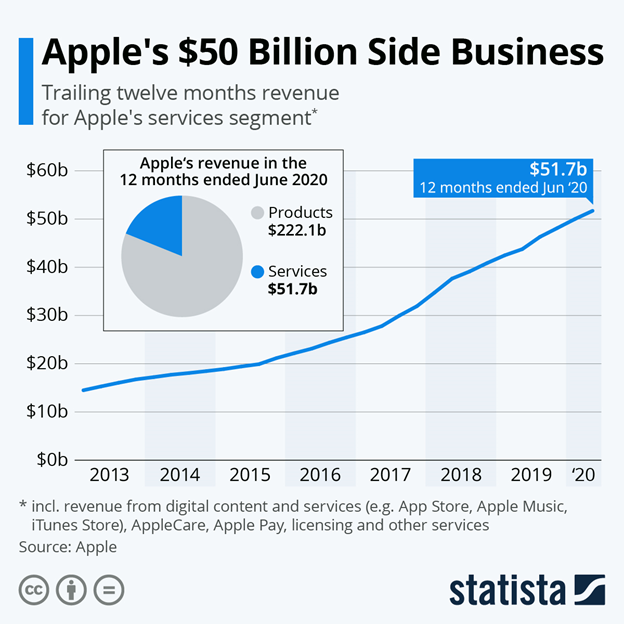 With respect to AI, Apple’s voracious appetite for the acquisition of AI startups underscores their objective to install these features in their products according to the following chart entitled Apple Leads the Race for AI Domination provided by CB Insights and presented by Statista. 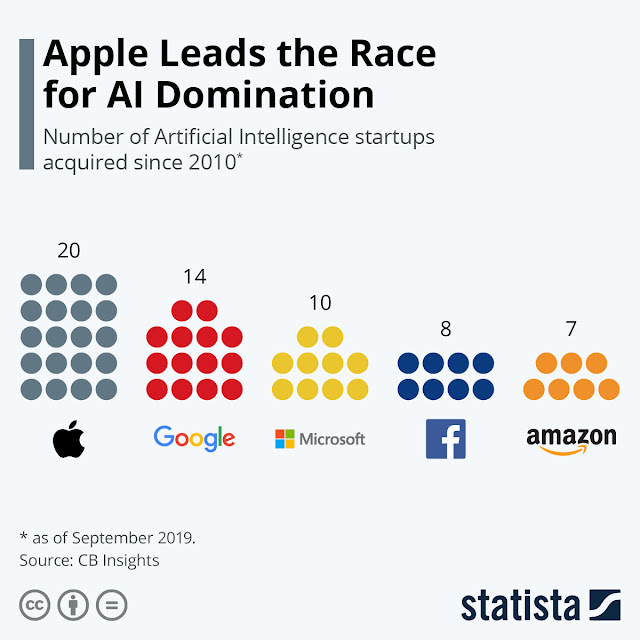 Consumers are waking up to the horrifying discovery that the cost of “food & circus” is out of control. The nightmare of a costly electronic device with a short-term lifespan represents a short candle that’s burning quickly from both ends. For this reason consumers are bleeding to death financially.

Consumers can no longer afford to replace their rapidly obsolete electronic devices because they’re squeezed between the agonizing choice (and sometimes mutually exclusive) of “food & circus”. The cost of the newer models become prohibitively expensive for the growing unemployed with many non-essential yet newly “standard” features and packages with terms & conditions that are indecipherable and non-negotiable. Although cyber-communication is the new baseline making mobile devices a necessity, the consumer has fewer choices to purchase a device with the flexibility to request and receive customized basic functions.

From an industry perspective this situation opens enormous opportunities for smaller more nimble firms to capture this growing niche to offer affordable and sturdy devices to perform the 21st century everyday basics such as email, text, word processing & spreadsheets. It’s the cyber-Hyundai vs the cyber-Ferrari that will still get you from points A to B albeit slower and in less style but efficiently and it will get you there with plenty of money left over for the other essentials - the Jones next door be damned.

It wouldn’t be surprising if frugal might represent the inevitable blowback to hyper-consumerism and the aspirational lifestyle. Because of the aforementioned troika of disasters occurring in short order, a strong economic recovery, whenever it occurs, may be delayed. When it comes to survival even Americans who have notoriously short memories will be risk averse to buying non-essential services just in case yet another Black Swan catastrophe strikes in the near future.

Posted by Atthehighestelevels at 11:37 AM