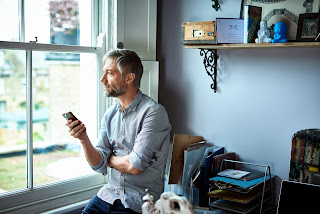 When global shutdowns began in March advanced cyber-technology enabled millions of white collar Americans to continue their work from the comfort & safety of their sanctuary home as the pandemic ravaged the less fortunate communities and essential workers.

After several weeks it became apparent to many firms that remote work provided more than just a modicum of business to survive and avoid financial collapse. Indeed performance and productivity exceeded expectations and continued through the progressive easing of restrictions.

For this reason many firms have overhauled their business model to maintain a quasi to permanent large remote workforce which translates into considerable fixed cost savings in the reduction of office space and leasing costs.

At first glance this trend may appear as a win-win for the employee and the firm. Remote workers can eschew commuting time and costs as well as avoid office politics. However many workers will realize that they’re prisoners in their own home office and whose movements may be just as equally scrutinized as if they were physically at the office. In other words they’re working in a larger, albeit, privately owned cubicle – hybrid gig workers.

There are a plethora of legal issues in this new work landscape with respect to the level of privacy the employee has in their own residence, whether rental or owned, utilizing or accessing company (often proprietary) hardware and/or software. One hot issue is surveillance and whether this is merely an issue of swapping the corporate prison cell for the home office prison cell. The employee is a prisoner on a longer leash within a soft electronic barbed wire cage with all the comforts of home.

According to the following Pew Research Center report entitled Majority of US Young Adults Now Live With Their Parents, presented by Statista, a German online statistical firm, 9 September 2020, the number of young adults living with their parents is challenging similar numbers during the Great Depression.

These Millennials, Generation Xers and Yers are generations who grew up with and are comfortable with the internet. It’s a technology that often serves as a surrogate friend or parent who is nothing more than a dispassionate, robotic frenemy who knows too much about them and tattle tales everything to their corporate masters. It’s Hal 9000 on steroids. Like the Matrix they’ve been born into technological slavery. These younger generations are subject to the “new normal” of permanent remote work and continued remote possibility of pay increases or advancement.

Furthermore these young people suffer from double isolation not only from the office but the present-day ability to make enough money to move out of their parents’ home. In effect they have two wardens – familial and corporate.

This new trend bodes badly for minorities, older workers and those deemed personas non-grata. Discriminatory actions or practices will be far more difficult to detect yet alone prove in such an environment leaving even the smartest, ambitious and talented minorities behind particularly since they’ll literally be “out of sight, out of mind.”

In claiming corporate social responsibility firms can cleverly shift their workforce demographic by promoting minorities to senior management positions (with great fanfare I might add) and brag about how the number of minorities in senior managements are a greater percentage than the country’s demographics. It’s called “front-loading” and provides the firm with a sleek & slick public relations façade. In the meantime firms can stifle the progress of their other well-qualified minority counterparts.

The terrifying aspect not articulated in the chart is the suddenness at which this trend has developed. The Great Depression spanned several years while the present-day pandemic has accelerated this trend in mere months.

For firms remote work will eliminate the need to pay a premium to those workers who work in urban areas vs the suburbs since everyone’s new “home office” is identical because the only equipment required is a decent laptop and ancillary electronic devices such as a mobile and printer.

For this reason wages for remote workers will flatten. Opportunities for advancement will be far more challenging without the daily, face-to-face interaction that often determines qualitatively which candidates have what it takes to assume greater responsibilities and leadership roles. It’s the same work but different four walls.

The lack of person-to-person interaction creates profound psychological stress as compared to getting the heads-up via gossip channels on possible layoffs, firings, and reorganizations. For this reason you can neither hear or see your enemies plotting and sneaking up on you. Imagine yourself blindfolded with earplugs and placed in a tiger’s cage not knowing whether the type of feline that you share it with. Remote work is the psychological cost and illusion of freedom from the corporate yoke.

Posted by Atthehighestelevels at 4:45 PM