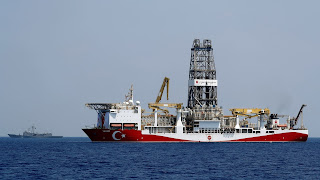 Albert Goldson CEO Indo-Brazilian Associates provides deep-dive perspectives and dynamics not discussed by western media on the increasing geopolitical tensions in the Eastern Mediterranean with respect to energy resources in disputed marine territories during a podcast interview entitled The Latest in Energy and the Eastern Mediterranean with Savannah Lane, Executive Director of the Turkish Heritage Organization, 15 September 2020.

A confluence of events is contributing to the intensifying geopolitical tensions in the Eastern Mediterranean between Turkey and Greece in their pursuit for energy self-sufficiency and dominance.

The mainstream media is supporting western governments’ contention portraying Turkey as the aggressor in their attempt at an energy power grab through naval intimidation.

Although Turkey has the largest economy in the region and the second largest military in NATO, they have been deliberately excluded from critical agreements which would make them equal partners with respect to dispute resolutions and access to resources in the region.

The legal discriminatory agreements that are politically isolating Turkey are the following:

For this reason any discussions with respect to disputed maritime zones is hotly adversarial rather than diplomatic member-to-member conversations towards a mutually satisfying resolution.

Because Turkey justifiably refuses to be politically neutered it is unilaterally pursuing gas exploration in disputed maritime areas in the Eastern Mediterranean. Most notably Turkish drilling has not resulted in discovery of gas reserves.

Gas market prices are depressed and will continue for at least several more years as the global economy recovers unevenly in fits & starts. Furthermore, with respect to gas development in the Mediterranean, Egypt’s Zohr and Israel’s Leviathan gas fields are yielding copious quantities which will contribute to low global gas prices.

Despite low prices the priorities for countries in this region a reduction of gas import dependency reduces the risk of political/economic blackmail from their current suppliers (namely Russia and to a lesser extent, Iran), tremendous foreign reserve savings and ultimately internal social stability.

Food and energy supplies are heavily subsidized by governments in the region. Any reduction of subsidies because of an economic downturn can easily trigger internal social unrest. Less expenditures on energy through their own exploration provides greater social stability regardless of global commodity prices.

Because of Turkey’s ever-growing precarious economic situation, development of gas fields in the nearby Mediterranean is a form of economic salvation regardless of the leadership.

Posted by Atthehighestelevels at 4:00 PM