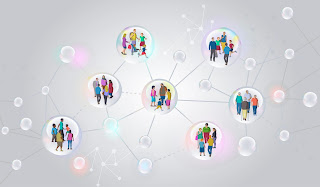 Destruction of the Corporate Tribe

Like many governments who are using the cover of the pandemic to seek out political rivals and other “troublemakers” it is certainly plausible to believe that corporations are using similar tactics to consolidate their control.

When the pandemic went global isolation and telecommuting for non-essential workers were necessary so that the global economy wouldn’t collapse. For several months restrictions are easing however many corporations have mandated telecommuting indefinitely with, in some cases, skeletal rotation of offices workers on the premises.

In the meantime there are countless warm & fuzzy human interest stories with respect to the pros & cons of telecommuting including certain conveniences but lacking the in-person office camaraderie and the hopeful anticipation of physically returning to the corporate office sometime in the near future, or perhaps post-Covid vaccine inoculations sometime in 2021.

Humans are a tribal species. When we’re isolated it’s against law of nature that leads to our demise psychologically and physically. Corporations are tribes – business tribes. Corporations are members of an industry all of which provide the worker an identity on every level. Regardless of the capricious white collar labor laws there’s at least a modicum of affiliation and protection.

The following chart entitled Why Working From Home Shouldn’t Be Taken For Granted, provided by the US Bureau of Labor Statistics and presented by Statista, an online German statistical firm, outlines the industries and percentage of workers who are able to work remotely in April 2020. Despite the easing of restrictions it’s unlikely that these figures have changed dramatically. 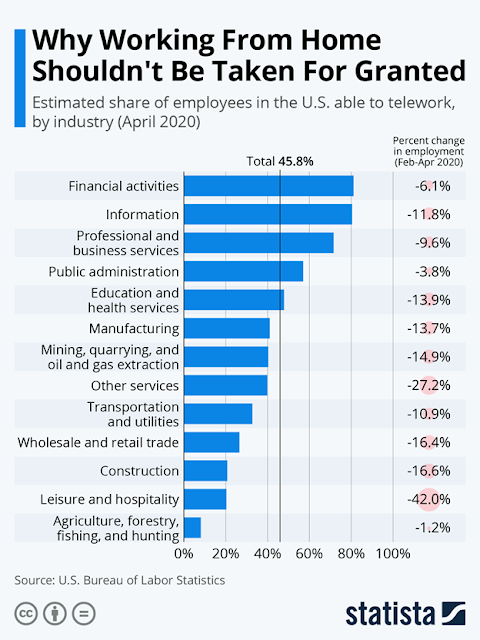 There is no better time or precipitous moment like now for corporations to institute lockdown precedent-setting policies for greater control over their workers using the cover of health safety & security for their workers with the coercive imposition of part-time and/or full-time telecommuting.

For decades the Iron Curtain kettled Eastern Europeans preventing their escape to and communication with democracies. The same pattern is occurring within democratic borders facilitated by a pandemic which has created a de facto state of emergency in which governmental and private industries are using emergency, or emergency-like powers, to dictate terms. Often these emergency powers become long-term and insidiously codified without public debate.

In an iron bubble telecommuting creates a static demographic environment for workers who will be perceived as nothing more as professional work-at-home drones with highly specific job tasks and thus limited ability or flexibility to change jobs or careers.

In this new work environment corporations are pulling away the proverbial slippery corporate ladders of advancement which effectively insulates every level of the corporation and isolates each department.

No longer do you have a glass ceiling rather a concrete one. Glass ceilings are visually transparent and can be shattered. Instead the corporation’s replacement is the insidious creation of organizational concrete concentric rings.

The Iron Bubble and Its Consequences

Physical isolation stymies and discourages diverse and innovative ideas. Furthermore there will be a lack of a mélange and cross-pollination of ideas and percolating perspectives across departments achieved only through person-to-person interaction.

The irony that the ivory tower is now in the cloud whose ideas and decisions are made exclusively at the highest levels. The decibel levels in those corporate echo chambers are at eardrum splitting levels making them deaf as to their own self-destruction.

As corporate decision makers become ever-increasingly reliant on AI driven numbers than informational nuances from humans this leads to an erosion of competitiveness as the corporation develops a Maginot Line mindset. A medium to long-term isolation policy creates widening fissures in every nock & cranny of the corporation and eventually leads to a psychic break. First the corporation and then the industry itself will needlessly collapse onto itself and die.

These new normal policies are already mirroring the gross social inequities. The temptation to engage in immoral and unethical practices, albeit legal, is powerfully overwhelming, especially when no one can see you. There’s no need for an executive secretary on-site as the gatekeeper because they’re all hiding in the cloud.

The corporate mantra of advocating innovation from their staff is now officially nothing more than lip service. Without the proper outlet mechanisms to foster it, those lips are now gagged and sealed.

Even management who historically have applied the best intentions and ardently encouraged their workers to strive for innovation inevitably are entrapped and sucked into this toxic vortex.

The challenge for every business is to eschew these isolationist temptations and determine at what point to cease survival operations and instead formulate strategies for growth.

Posted by Atthehighestelevels at 1:51 PM