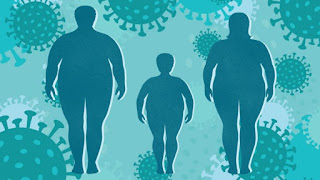 Counter-intuitively the looming food insecurity crisis will trigger an increase in America’s other epidemic: obesity. As permanent unemployment grows and becomes more entrenched, more residents will make agonizing choices on how to budget their dwindling savings among food, shelter (rent/mortgage), utilities and health care.

The affordability of healthy food choice such as fruits and vegetables against the reality of lower savings and increased prices for these items become rapidly unsupportable. The survival alternative is cheaper and far less healthier foods which provide the necessary calories (albeit often empty and harmful) to meet minimal daily caloric requirements.

A study by Drexel University in Philadelphia of 2,800 urban Americans in a Multi-Ethnic Study of Atherosclerosis (MESA) matched data collected on diet with food prices at nearby supermarkets. Healthy foods were defined as dairy products, fruits and vegetables; the junk food were defined as soda, sweets and salty snacks. It was determined that when the prices of healthy food far exceeds that of junk food, consumers are inclined to purchase the latter. Consider this a form of self-rationing.

According to the Office of Disease Prevention the following chart provides the range of minimum calories required for male and female adults, adolescents and children:

For this reason although the level of food insecurity may not be as severe as forecast, the health of Americans will deteriorate considerably as long as the economy suffers through a depress/recession with continued high unemployment regardless of future stimulus packages.

Historically during wars or crisis the population were forced to adapt to a food shortages by reducing food consumption which is usually of inferior quality with a caloric count that barely minimal survival levels. Only the wealthy have been able to maintain their culinary lifestyle, at least in quantity and/or quality, during these difficult periods. This pandemic is no different.

According to the October 2017 report by the Centers For Disease Control and Prevention entitled America is Fatter Than Ever, and presented by Statista, an online statistical firm, America’s obesity rate has exploded since 2000. Most disturbingly this includes youth obesity because younger people are more likely to stay obese and can result in an early death in adulthood. The report adds that over 70% of Americans are either overweight or obese with normal weight citizens in the minority. 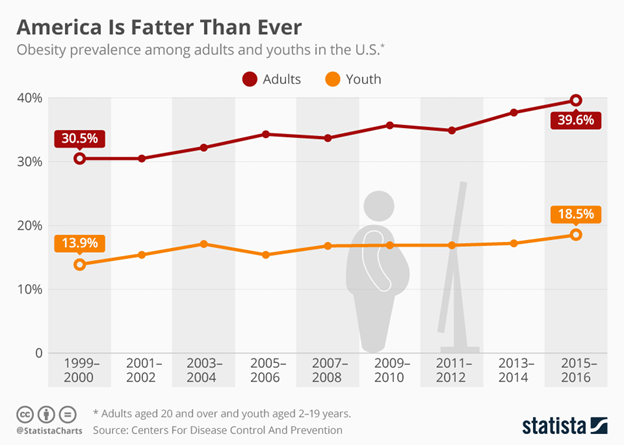 Additional factors that will exacerbate the problem are governmental lockdowns and restrictions that prevent general physical movement include:

·         Exercise: Many gyms have closed because of bankruptcy. Those that are open have restrictive workout rules. For the unemployed gym membership costs are now unaffordable and getting motivated to exercise sufficiently at home is a huge challenge.

The present-day focus has been on the vulnerability of obese citizens to Covid-19. Anecdotally the mainstream media, in a tongue in cheek manner, has reported on many people gaining considerable weight during the initial spring lockdowns. Nonetheless the aforementioned restrictions remain which prevent even the most disciplined person from losing the weight gain, assuming they were a normal weight prior to the lockdowns which constitute only 30% of the Americans. Certainly that figure has decreased since it’s publication.

One can probably project that the general demographic trend since the lockdown has been the following:

What this means is that we’ll have a considerably fatter America whenever this economic crisis ends which could last for years. Medium-term this will put enormous strain on the cost of medical care to treat the associated conditions of obesity.

Posted by Atthehighestelevels at 4:49 PM