The Silence of the Whistleblowers 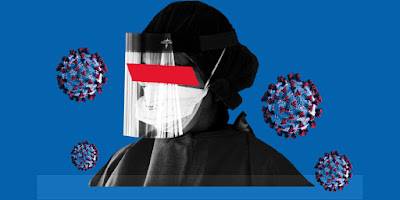 During the height of crisis medical professionals and supporting essential workers fought on two fronts: the virus and corporate threats. The former is self-explanatory. The latter was (and still is) under the C-suite’s sword of Domacles that threatened the front-line, life- saving medical shock troops with job losses for justifiably demanding first & foremost more and better-quality safety protection.

Corporate’s behavior during the initial stages of a once-in-a-century pandemic that was killing thousands daily supported a deep and disturbing sadism towards their workers and society. While everyone donned masks for protection, corporations removed theirs and showed everyone the beast underneath the smarmy public relations smile.

For this reason the nature and convenience of remote work connecting workers 24/7 is a heaven sent cover for corporate malfeasance to operate silently often without leaving a trace on a steroid-infused level.

The economic implosion provides both corporations and government agencies the perfect cover for mass layoffs while intimidating the “surviving” workers, most of whom are working remotely or in the office part-time, into complying to their “Simon says” tune otherwise risk joining the unemployed masses on the ever growing food bank lines.

The hyper-competitive global economy is the catalyst not only to protect market share and profits but also survival. This reality gently pushes even executives in credible and trustworthy firms into a dark place.

Present-day across many industries executives are seeking and receiving board approval for generous bonuses before the firm files for bankruptcy. This has happened most egregiously in the US shale oil industry in which only a handful of companies were profitable or controlled costs for many years. Yet the executives were “rewarded” with huge bonuses while hundreds of employees were let go.

Corporations continue to maintain an asymmetrical organizational chart with respect to lack of diversity often front-loaded with exclusively male Caucasian executives. Even with societal pressures through the Black Lives Matter and other movements, the economic recession/depression gives corporations the cover in delaying the implementation of meaningful changes. Corporations pacify their critics by announcing with great fanfare the establishment of (exploratory) committees while dragging their Ferragamos on making commitments until the pressure eases. To put it bluntly the world of corporate ethics has become a meaningless mantra.

Government agencies are also purging workers and reducing, sometimes eliminating units within their organization while shifting priorities. This means that there are far fewer watchdogs assigned to investigate corporate abuse of workers’ rights.

The public-private duopoly, theoretically greater efficiency through greater cooperation, has increasingly resulted in the comingling of efforts and money which has exposed (perceived) conflicts of interests which are often ignored or legally expunged through official waivers. Ultimately the primary interests have been to satisfy the other party’s needs before satisfying those of the public good.

The Whistleblower at the Cusp of Extinction

Whistleblowers provide an unofficial essential societal service as an early warning system for underlying and emerging nefarious practices. Their role is multi-faceted ranging from integrity/credibility to protecting the public to protecting the corporation from itself when honest albeit highly paid executives are reticent in risking their salaries, bonuses, jobs and careers by speaking out.

The present-day and even post-pandemic new normal era will witness the culling of the daring, hardy and martyr-like whistleblower to the point of near extinction. Whistleblowers operate well in a rich person-to-person work environment, to be in situ daily, enabling them to observe the dynamics of office politics, get information from co-workers and secure damning evidence. Remote work has literally unplugged the whistleblower’s ability to acquire evidence.

For example the war in the cyber-world has intensified as hackers [internal and external] fueled on triple espressos are aggressively probing firewall weaknesses as organizations reduce their cyber-defense workforce. For all its omnipotent AI’s effectiveness is compromised because the pandemic crisis presents a novel paradigm in which there is little or insufficient historical data to recommend solutions.

The whistleblower’s journey has always been a risky endeavor with no exit strategy despite legal guarantees. Once they embark down this path their careers within the industry and often elsewhere are vaporized forever. This level of crossroads decision is brilliantly captured in a scene from the movie The Counselor (2013) between Michael Fassbender (lawyer) and Javier Bardem (drug dealer) in which Fassbender voluntarily makes a decision to go forth with a high-risk deal despite Bardem’s warnings.

Corporate criminality is historically notoriously hard to prove even with smoking guns billowing from all directions. Furthermore the phalanx of well-compensated corporate lawyers have almost unlimited resources to insure damage control and corporate survival.

Finally the real politik of the relevancy of a whistleblower is that corporate America is in a deep crisis and the corporation’s actions can conveniently be deemed essential under de facto emergency powers. Economic survival supercedes “doing the right thing.”

The fetid, bottomless cesspool for corruption in the US is the District of Columbia. It’s not merely a swamp that can be drained rather a toxic version of the Mariana Trench that encompassing five decades and multiple administrations of extreme malfeasance

According to the following chart entitled The Worst US States for Corruption based on a report by the University of Illinois at Chicago report and presented by Statista, an online statistical firm, Washington, DC is the undisputed capital of corruption, a target-rich environment for the whistleblower.

“The report examined the problem across all 50 states and the District of Columbia, finding that D.C. had the highest number of public corruption offences per 10,000 inhabitants between 1976 and 2018 with 16.79. That can be attributed to several factors including a comparably low population but also because it is the center of national government and hosts the Department of Justice. That means nearly all of the country's federal agencies are housed there with large numbers of government employees who can monitor and investigate potential offences.” More detailed particulars can be accessed in the aforementioned link to the chart.

Just imagine the Niagara Falls reduction in convictions during an era when most employees are working remotely. Latter day forensics will uncover a bevy of corruptive practices that normally would have been halted before serious damage was done. 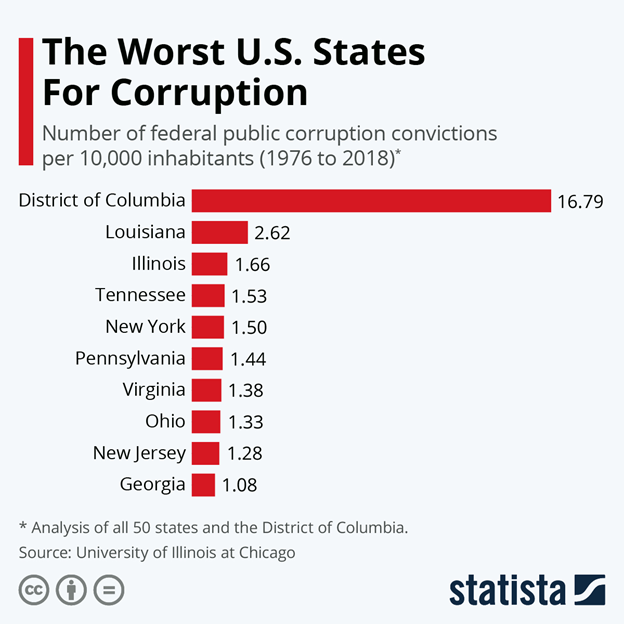 The pandemic has killed the whistleblower, the proverbial canary in the coal mine, putting at risk a potential robust economic recovery.

For the aforementioned reasons the cyber-suppression of whistleblowers and other conscientious workers is one of the preventable factors that will hamper economic recovery. Corporations weakened by the economic turmoil, like the recovering sick patient recovering from the virus, will require constant monitoring and progressive step-by-step fiscal therapy.

Posted by Atthehighestelevels at 2:06 PM